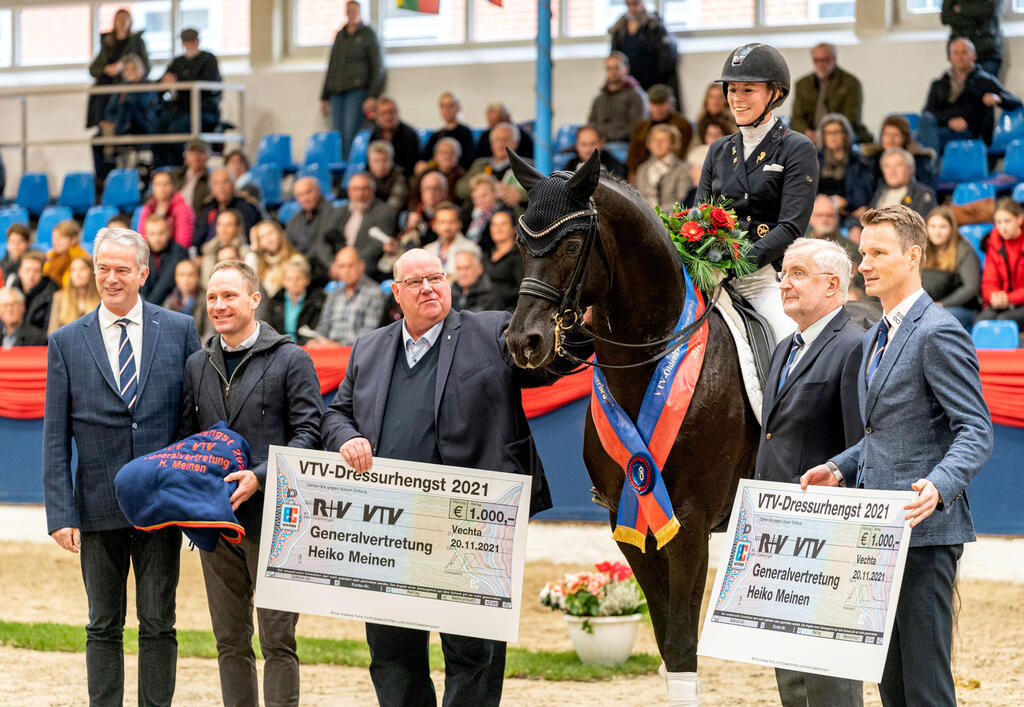 At the Oldenburg Stallion Days this year, a dressage stallion and a show jumping stallion were traditionally decorated with the VTV sash at the Oldenburg Horse Centre in Vechta. This year, the two stallions Morricone and Checkter received this highly endowed award for their top performances in sport and breeding. The R+V VTV General Agency Heiko Meinen, which specialises in animal insurance, did not miss the opportunity to reward the breeders and owners Heinrich Vahle, represented by his son Theo Vahle, Friesoythe, and Gestüt Bonhomme GmbH & Co., Werder, as well as Böckmann Pferde GmbH from Lastrup, with a generous check of 1,000 Euros for their outstanding breeding performance.

Whether own competition successes, price highlights at auctions, licensed stallions, champion foals or brilliant ring mares: Morricone, born in 2012, by Millennium/Trak. out of Hartima by Rubin-Royal - De Niro - Rubinstein I, bred by Heinrich Vahle, Friesoythe, owned by Gestüt Bonhomme GmbH & Co., Werder, has already achieved almost everything at the age of nine and advanced to a famous star sire in the past years.

Already on the occasion of his licensing in the Oldenburg Horse Centre Vechta in 2014, the beautiful black stallion advanced to the Champion Stallion. In 2015 Morricone was celebrated as the outstanding dressage winner of his 30-day test in Adelheidsdorf with a final score of 9.33. Due to his outstanding hereditary power paired with his outstanding own performance, the black beauty, who provided several price tops at various elite foal auctions all over the world, was named the main premium winner in Vechta in 2016 and produced three licensed sons in his debut year, including a premium stallion in Vechta.

At the age of seven, Morricone then led his first lap of honour in the advanced level class. Last year, his sons Mister Universe, born 2016, by Morricone I - San Amour I - Fürst Heinrich, bred by Dr. Gisa Löwe, Meyenburg, who was sold at the 3rd Oldenburg Online Special Edition for 340. 000 Euros, and the licensed Movie Star, born 2016, by Morricone I - Bentley - Rubinstein I, bred by Ines Lohmann, Extertal, who found a new owner at the 92nd Spring Elite Auction for 250,000 Euros, cause a sensation. Furthermore, the Reserve Champion of the Elite Mare Show Evita by Morricone I - Sandro Hit - Feiner Stern, bred by Günter Lüschen, Wardenburg, danced her way to the title of Oldenburg Vice Champion in the four-year-old class for mares and geldings in Rastede under Uwe Stradtmann.

Currently, Morricone, whose full brothers Morricone II and III were also licensed in Vechta, celebrated victories and placings in Intermediaire II tests in Verden, Hagen, Balve as well as Rastede under his permanent rider Lena Waldmann and is well on his way to the top class. The origin of these great successes can certainly be found in the Hainbuche dam line, which produced Donnerhall's dam's sire Markus, Weltgeist I, San Remo as well as numerous Grand Prix-successful horses.

The at the Oldenburg Horse Centre Vechta in 2015 licensed Checkter, OS, born in 2013, by Cellestial out of Ilonka by Lord Pezi - Ile de Bourbon - Lord Liberty - Gotthard, breeder and owner Böckmann Pferde GmbH, Lastrup, sets new standards in the breeding of show jumpers.

After the grey stallion passed the first part of his sport stallion performance test in Munich-Riem in 2017 with an unprecedented top score of 9.66, he also belonged to the absolute top group of his age group in Verden the following year with a score of 9.13. Carefully and gently developed, but nevertheless decorated with victories in 1.10 m to 1.30 m courses for young show jumpers, also internationally, under Heinrich Holtgers, Leonie and Gilbert Böckmann, Checkter was awarded the Ic main premium at the Oldenburg Stallion Days in 2018 due to his sporting development and above all the quality of his first foal crop. 2020 he produced his first two licensed sons with Checkorado, OS, born 2018, by Checkter out of Paula by Pilothago - Diarado, breeder: Peter Engel, Hünxe, and a beautiful dark bay stallion, OS, born 2018, by Checkter out of Utasha by Ustinov - Contender, breeder: Arndt Schwierking, Barver.

This year the phenomenally jumping grey stallion made the jump to the advanced level and placed third in Mühlen under Leonie Böckmann, who also placed internationally with him for the first time in 1.45 m level jumping competitions in Pinneberg.

The origin of this success can be found in his exemplary performance pedigree, which is like a firework of international show jumping genetics: His sire Cellestial placed highly in Nations Cups and was one of the best German show jumping sires with 77 S-successful and 25 licensed sons. Dam Ilonka, who was a finalist at the Bundeschampionat in 2005, was herself successful in advanced level show jumping and gave birth to none other than the licensed and 1.60 m successful 2018 World Championship participant in Tryon Check In by Cordalmé Z, reserve winner of the OS licensing in 2005, under Samantha McIntosh as well as the S-successful Check Up by Cordalmé Z under Vincent Elbers. This mare family also produced the well-known stallions Carridam PJ, First Gotthard, Fürstengold, Firth of Lorne/Marcus Ehning, Kashmir van Schuttershof, who was internationally successful at CSI5* level under Philip Lejeune, as well as several internationally successful show jumpers.

Photo above: Morricone by Millennium/Trak. was awarded VTV dressage stallion of the year due to his success in breeding and sport. On the photo (from left): Heiko Meinen, R+V VTV-Generalvertretung, Robert Conredel from Gestüt Bonhomme, breeder son Theo Vahle, Morricone with Lena Waldmann in the saddle, Oldenburgs president Dr. Wolfgang Schulze-Schleppinghoff and Marco Pundsack. (ten Brink-Schempf)