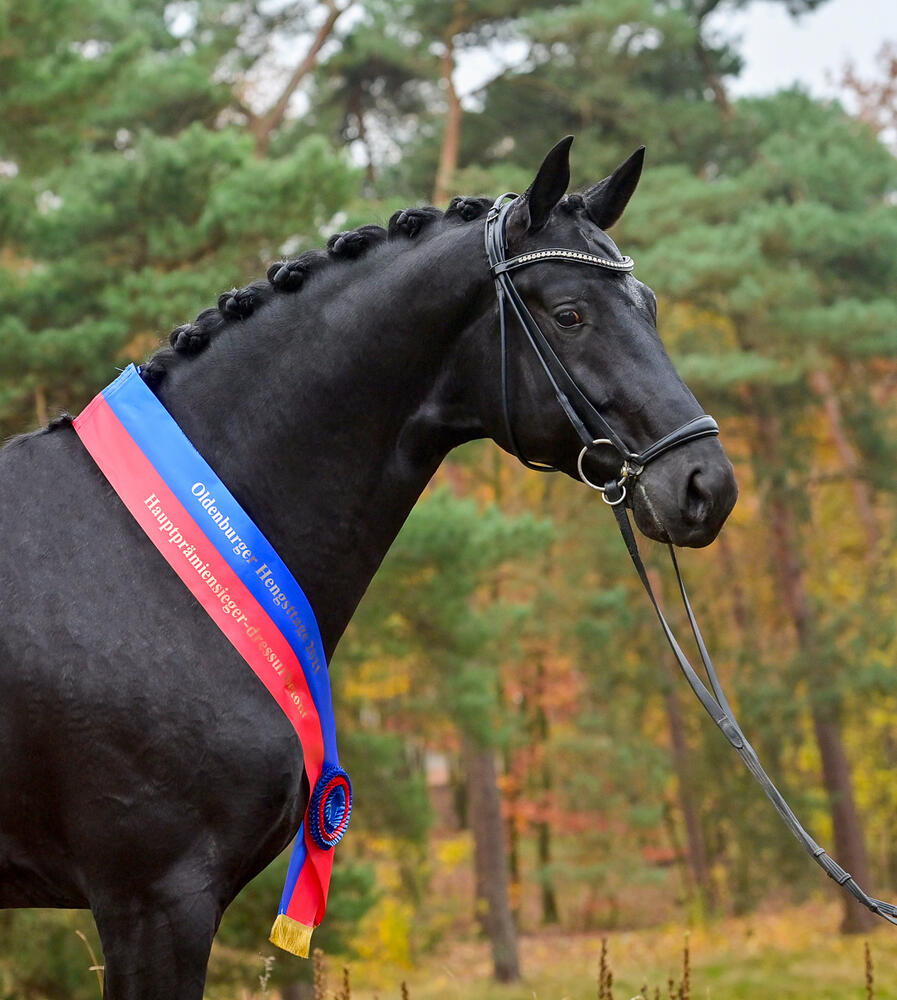 At this year's Oldenburg Stallion Days, the newcomers Total McLaren and Conthalou impressed as Oldenburg Main Premium Winners. In addition to the sporting development of the stallion, the result of the stallion performance test and, above all, the quality of the first foal crop at the offspring inspection are taken into account when deciding on the Main Premium.

Total McLaren, born 2017, by Totilas out of Deja vu by De Niro - Sandro Hit, bred by Ralf Knauf, Haan, ownend by Helgstrand Dressage, Denmark, was crowned the celebrated Main Premium Winner at the Verband der Züchter des Oldenburger Pferdes (OL). The black beauty was premium stallion at his stallion licensing in 2020. He completed his 14-day test in Denmark with a final score of 7.85 and his 35-day test, also in Denmark, with an overall score of 8.07. In 2021, he was named bronze medalist of the four-year-old stallions at the Bundeschampionat in Warendorf. The panel of judges around Gerd Sickinger raved: "A modern riding horse and a stallion with nobility, frame and uprightness". The licensed stallion achieved an overall score of 9.3. His brother Damon de Luxe OLD, born 2013, by Damon Hill is successful in advanced (S*) level dressage competitions with Kim Sarah Kleis in the saddle. Total McLaren produced the Elite foals Teseo by Total McLaren - De Niro and Tribeca NY by Total McLaren - For Romance I at the Fall Elite Auction, two highly sought-after candidates. The latter was knocked down to new customers from Costa Rica. Deja vu, dam of Total McLaren, participated at the Elite Mare Show in Rastede in 2012 and was victorious in tests for young riding horses. Total McLaren has an important granddam by Silberaster OLD. The Sandro Hit daughter was champion mare at the Elite Mare Show in Rastede in 2006 and won the gold medal at the Bundeschampionat of three-year-old riding horses in the same year and repeated her success at the same place as a four-year-old. In 2008 Silberaster OLD danced her way to bronze at the World Championships for Young Dressage Horses in Verden.

Fynch Hatton OLD, born 2016, by Formel Eins out of Senorita Meyer by Sir Donnerhall I - Weltmeyer, bred by Bernhard Ilting-Reuke, Borken, owned by Helgstrand Dressage, Denmark, was ranked silver among the dressage stallions. The strong-moving stallion started his career in 2019 as the winner of the Oldenburg Saddle Licensing in Vechta and was the winner of the State Championships in Rastede at both three and four years old. In 2020, he completed his 35-day test in Denmark with an overall score of 8.49. Also in 2020, he triumphed as the winner at the Bundeschampionat for four-year-old stallions in Warendorf and in 2021 he finished second at the Danish Young Horse Championships with a final score of 9.24. The stallion came into stud use late after his saddle licensing in April 2019, which is why his first two foal crops count in the offspring evaluation. His charming son Feingold by Fynch Hatton - Fürst Romancier was the top priced stallion at the Fall Elite Auction. The stallion prospect was sold to regular customers from the USA. Fynch Hatton's dam, Senorita Meyer, also produced the licensed stallions First Choice by Fidertanz as well as Fürst Magic by Fürstenball OLD, victorious in Prix St. Georges under Dorothee Schneider.

Moreno OLD, born 2017, by Morricone I out of Simone by San Amour I - Diamond Hit, bred by Wilhelm Strohm, Nordhorn, ownend by Gerd Sosath, Lemwerder, was awarded bronze. In 2019, the shiny man was a premium stallion at the Oldenburg Stallion Days in Vechta. In 2020 he was silver medalist at the Oldenburg State Championships in Rastede and excelled in the finals of the Bundeschampionat in Warendorf. He completed his 14-day test in Schlieckau with an overall score of 7.85. In 2021, Moreno OLD successfully passed the Sport Test Part I with a focus on dressage in Münster-Handorf with a final score of 7.95, with all gaits scoring over eight. Moreno OLD already shines with eight Oldenburg Elite foals. The dam line of the dark bay has produced a considerable number of Grand Prix winning horses. These include Di Lapponia by Donnerhall with Paulinda Friberg, Sweden, as well as Salieri by Sandro Hit under Victoria Max-Theurer, Austria. The two licensed stallions Dr. Doolittle by Donnerhall with Markus Gribbe and St. Emilion by Sandro Hit with Dorothee Schneider, who were internationally successful up to Grand Prix Freestyle, also come from this high-quality dam line.

Conthalou, born 2017, by Conthargos out of Belinda by Balou du Rouet - Chacco-Blue - Lancer III, bred by Johan Ifverson, Sweden, ownend by Gestüt Lewitz, Steinfeld, won the Main Premium at the Springpferdezuchtverband Oldenburg-International (OS). The expressive bay stallion was the celebrated Champion Stallion at the Oldenburg Stallion Days in Vechta in 2019 and was knocked down to a top price at the stallion market. Conthalou passed his 50-day test in Adelheidsdorf with partial scores of 9.0 in jumping manner, ability and rideability as well as 9.25 for his interior, resulting in an overall score of 8.86. His dam Belinda is currently successful in international show jumping at 1.45 m level under Antonia Andersson, Sweden. The granddam Chacco's Lüd by Chacco-Blue is the full sister of René Tebbel's successful stallions Chacco's Son I and II and produced two licensed stallions, Corydon van T&L by Cornado and For Chacco TN by For Pleasure, who are also successful in sport at 1.40 m level. In 2021 the Conthalou son Connery was the top priced jumper foal from his first foal crop at the Fall Elite Auction in the Oldenburg Horse Centre in Vechta.

Photo below: Conthalou by Conthargos won the Main Premium Title of the show jumpers 2021. (gr. Feldhaus)