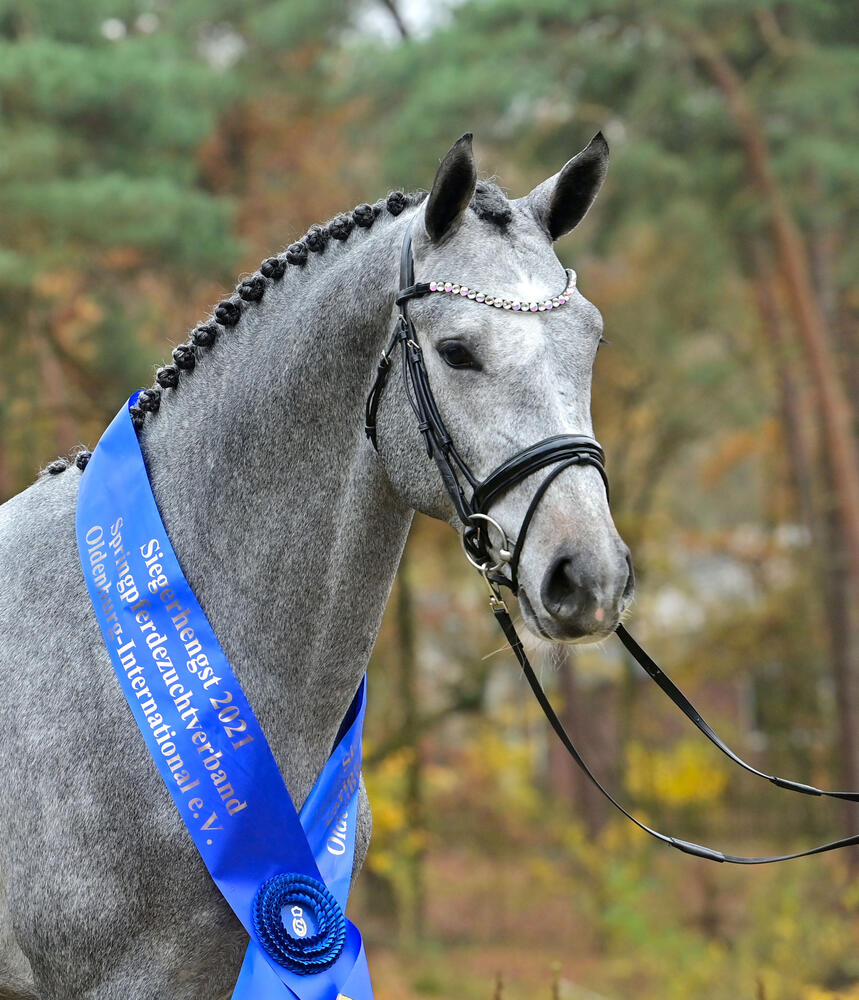 A son of Cornet Obolensky - Cassini I - Contender - Narew xx, bred by Thomas Koch, Haltern am See/North Rhine-Westphalia, and exhibited by Marc Idelmann from Wetschen/Lower Saxony, was the celebrated champion stallion of the Springpferdezuchtverband Oldenburg-International (OS). The grey stallion was discovered as a foal in Vechta. Also from this dam line the successful jumpers Ballerina by Caretino/Markus Merschformann and Singu by Singulord Joter/Hans-Thorben Rüder, both successful up to 1.60 m.

Oldenburg's Breeding Director Bernhard Thoben reports about the jumping talent: "The champion stallion, a shining horse in a white coat. He passed the free jumping test with great potential, a strong opening hindquarter and a lot of ability, which is also reflected in his pedigree. He was bred through Cornet Obolensky - Cassini - Contender and then the circle closes, because the stallion was discovered here in Vechta at the foal auction and now presented here again for the licensing. Our Champion Stallion of 2021 was bred by Thomas Koch and exhibited by Marc Idelmann. Congratulations."

The shining Oldenburg Champion Stallion of the Verband der Züchter des Oldenburger Pferdes (OL) was an offspring by Indian Rock - For Romance I - K2/T. - Schwadroneur/T., bred by Andrea Bechheim from Reichshof/North Rhine-Westphalia and exhibited by Helgstrand Dressage Aps from Denmark. Sire Indian Rock is successful in the big class under Dutch rider Emmelie Scholtens. Dam Herbstromanze was a participant at the Elite Mare Show in 2016 and is the sister of the World Championship finalist Sir Skyfall OLD by Sandro Hit, now successful in Prix St. Georges under Katrin Burger. The Grand Prix horses Saphira Royal/Kristina Bröring-Sprehe and Sergio Leone/Jan Ebeling, USA, are also from this line.

Oldenburg's Breeding Director Bernhard Thoben says about the champion stallion: "When we were just standing here together the phrase 'the king enters the track' came up. That is certainly a bit like that. A stallion endowed with great grandeur and an incredible amount of charisma, highly modern. Also endowed with great overview and much blood and with three evenly outstanding basic gaits. A stallion with rarely seen totality and a good alternative over the fine pedigree. A pedigree that was cultivated for a long time by Manfred Rüter from Dorsten, a long-time Oldenburg breeder. It is nice that this is the case and that such horses come along for us. A stallion where one looks forward to breeding and sport. We sincerely congratulate breeder Andrea Bechheim and exhibitor Helgstrand Dressage on this champion stallion at the Oldenburg Verband in 2021."

The Springpferdezuchtverband Oldenburg-International selected a son by Lord Pezi - Ustinov - Contender - Capitol I, as well as the Reserve Champion in dressage bred and exhibited by Arndt Schwierking, Barver/Lower Saxony, as silver medalist. His granddam Columbia is the sister of five horses successful in the big class, among them the 1.60 m mare Quapitale du Lavoir under Morgan Bardot, FRA. Bronze in the OS lot was awarded to a jumping stallion by Cascadello I - Quilot - Ramiro - Almé, bred by Patricia Maier, Sprockhövel/North Rhine-Westphalia, exhibited by SR Sportpferde, Stefan Ratajczak, Leipzig. His dam, Quira Z, as well as his granddam, Ramsy Z, celebrated top international successes in 1.60 m classes. The powerful brown stallion started his career as a foal in Vechta.