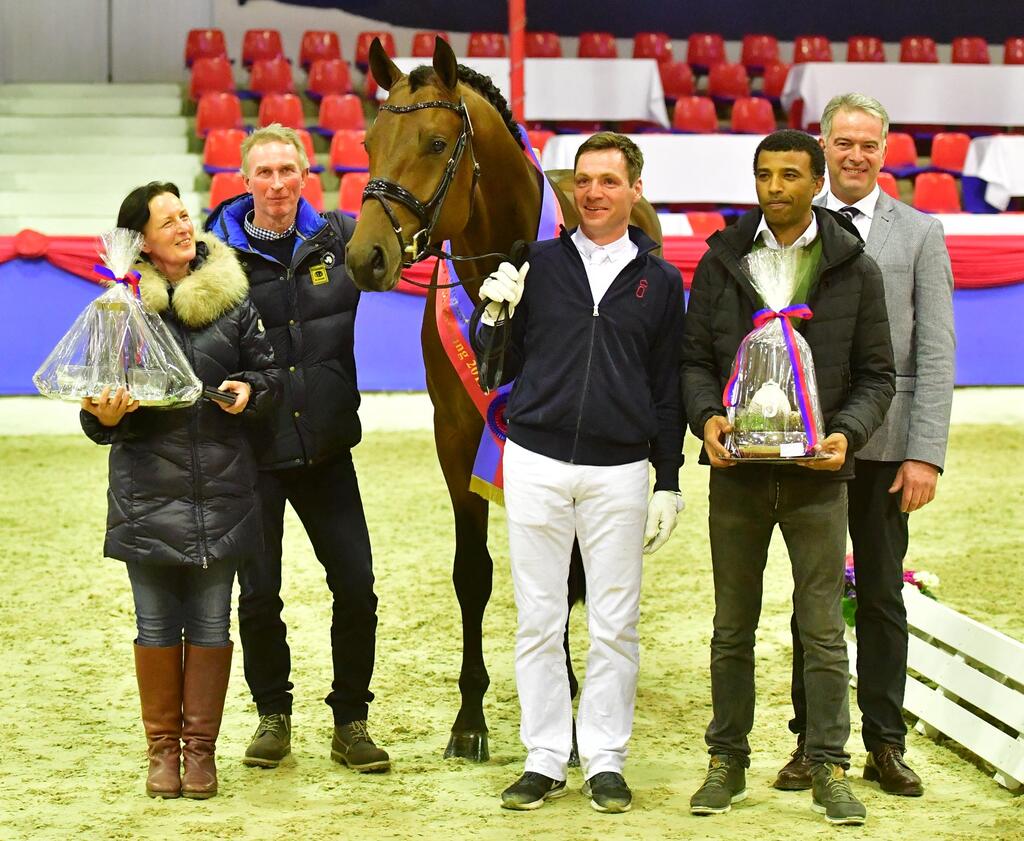 The impressive Champion Stallion of the 8thOldenburg Saddle Licensing held at the Oldenburg Horse Center Vechta is Fynch Hatton, born 2016, by Formel Eins out of Senorita Meyer by Sir Donnerhall I - Weltmeyer, bred by Bernhard Ilting-Reuke from Borken, Germany. "We have seen a wonderful stallion here. From the test rider Beatrice Buchwald he got the highest mark 10.0. His look and his sovereignty are an example par excellence – a pearl for breeding, "describes Oldenburg's breeding director Dr. Wolfgang Schulze-Schleppinghoff the champion. The dam of the Champion Stallion also produced the licensed stallions First Choice by Fidertanz as well as Fürst Magic by Fürstenball OLD, successful in advanced level dressage tests under Dorothee Schneider.

The Champion Stallion as well as all licensed and some not licensed stallions will be sold tomorrow on April 6that the 90thSpring Elite Auction in Vechta.

The Reserve Champion title went to What’s Up, born 2016, by Weltmeyer out of Sympatica Uno by Sir Donnerhall I - Rohdiamant, bred by Stutteri Uno Aps from Denmark. Already last year, the Reserve Champion came from the breeding of Danish Oldenburg breeders.

The Ic-premium was awarded to Bon Akzent, born 2016, by Bon Coeur out of Ambiente by Akribori - Akzent II, bred by Volkhard Folkers from Wanderland, Germany. Sire Bon Coeur was two-time Vice Bundeschampion of riding stallions. From his dam line are also the Grand Prix successful Fifth Avenue by Florencio I under Uwe Schwanz and Giacometti by Brentano II under Udo Lange.

All in all, the licensing committee of the Verband der Züchter des Oldenburger Pferdes licensed five stallions. Please find here the results of the 8th Oldenburg Saddle Licensing.

Several of the stallions of the Saddle Licensing will be sold tomorrow, on April 6th, at the 90thSpring Elite Auction at the Oldenburg Horse Center Vechta. Starting at 12:00 noon you have a chance to try out the young stallions under saddle. The auctions starts at 3:00 p.m.

If you want to see an overview of the entire collection on the Internet, go to the auction area of the Oldenburg website.

You can also easily purchase your favorites by phone. Please contact one of the following Oldenburg Auction Office employees for this.

Photo (from left): The Champion Stallion of the 8th Oldenburg Saddle Licensing Fynch Hatton by Formel Eins - Sir Donnerhall I framed by his breeder Bernhard Ilting-Reuke, his wife, rider and demonstrator Falk Schubert, his exhibitor Henry Junior Brewah Grandos from Spain and Heiko Meinen, sponsor of the award. (gr. Feldhaus)