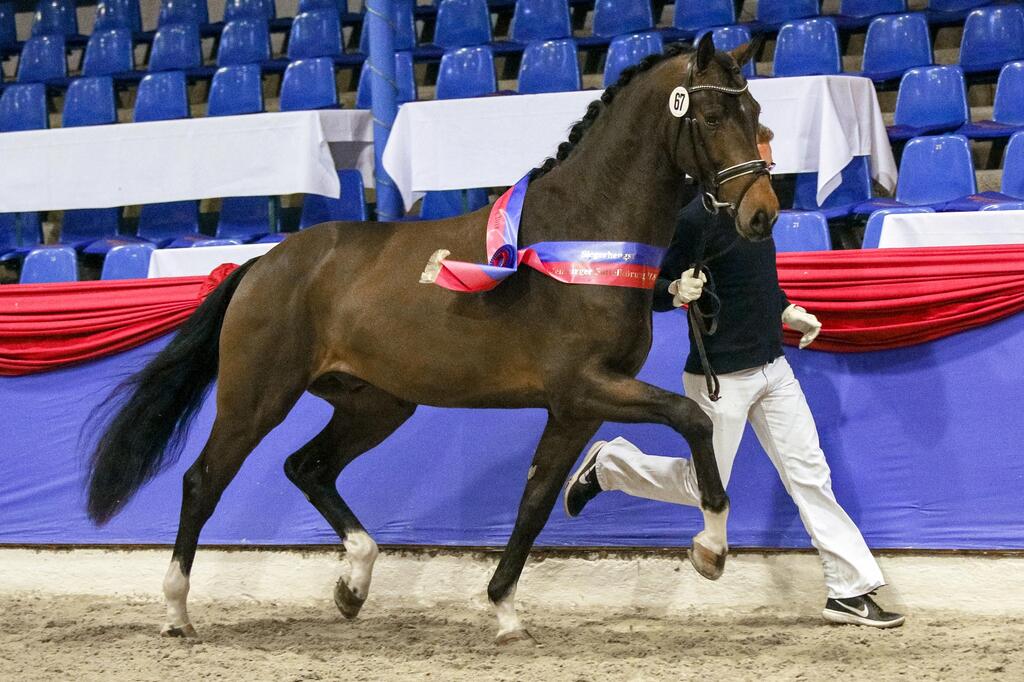 Internationality and rideability have high priority in Vechta. This mirrored the exclusive premium lot impressively. International breeders, exhibitors, Grand Prix-winning sires and top dams in sport - all this have the Premium Stallions in common.

Ready for the big stage is the radiant Champion of the 7thOldenburg Saddle Licensing held at the Oldenburg Horse Center Vechta Zac Efron, born 2015, by Zack - Don Larino - Duntroon, bred by Hermann Schildt from Ovelgönne, and exhibited by Blue Hors Aps from Denmark. His sire Zack was Stallion Champion at his stallion licensing and is now internationally successful in Grand Prix with Daniel Bachmann Andersen from Denmark. Dam sire Don Larino was the winner of the Bundeschampionat of the three-year-old stallions with Heiko Klausing. One year later, he shined as the Main Premium winner of the Oldenburg Stallion Licensing. This magnificent mover as well as the Reserve Champion will be sold tomorrow, April 7th, at the 88th Spring Elite Auction in Vechta.

The Reserve Champion title went to Le Roy, born 2015, by Apache - Fürstenball - Royal Hit, bred by Winie Zornig-Sylvesteren from Denmark, and exhibited by Petra Schöning from Könnern in Saxony-Anhalt. He was already discovered as foal at the Elite Foal Auction in Vechta 2015. His sire Apache impressed as Reserve Champion at his stallion licensing in s'Hertogenbosch, Netherlands, in 2008. By now, he is internationally successful in Grand Prix under his rider Emmelie Scholtens. The dam sire Fürstenball OLD triumphed as Oldenburg Champion Stallion, Champion of his Stallion Performance Test as well as winner of the Landes- and Bundeschampionat.

The Ic-premium was awarded to a son of De Niro - San Amour I - Latimer/Trak., born 2015, bred and exhibited by Birgit Kalvelage from Bremen. His dam Soiree d’Amour OLD celebrated the title as three-year-old winner at the Oldenburg Landeschampionat in Rastede and the Bundeschampionat in Warendorf. Now she is successful in Prix St. Georges and Intermediaire I with Kira Wulferding. Sire De Niro won Grand Prix Special tests with Dolf-Dietram Keller and leads the WBFSH Dressage Sire Ranking.

All in all, the licensing committee of Verband der Züchter des Oldenburger Pferdes licensed six stallions.

Several of the stallions at the saddle licensing will be sold tomorrow, on April 7th, at the 88th Spring Elite Auction at the Oldenburg Horse Center Vechta. Starting at 12:00 noon you have a chance to try out the young stallions under saddle.