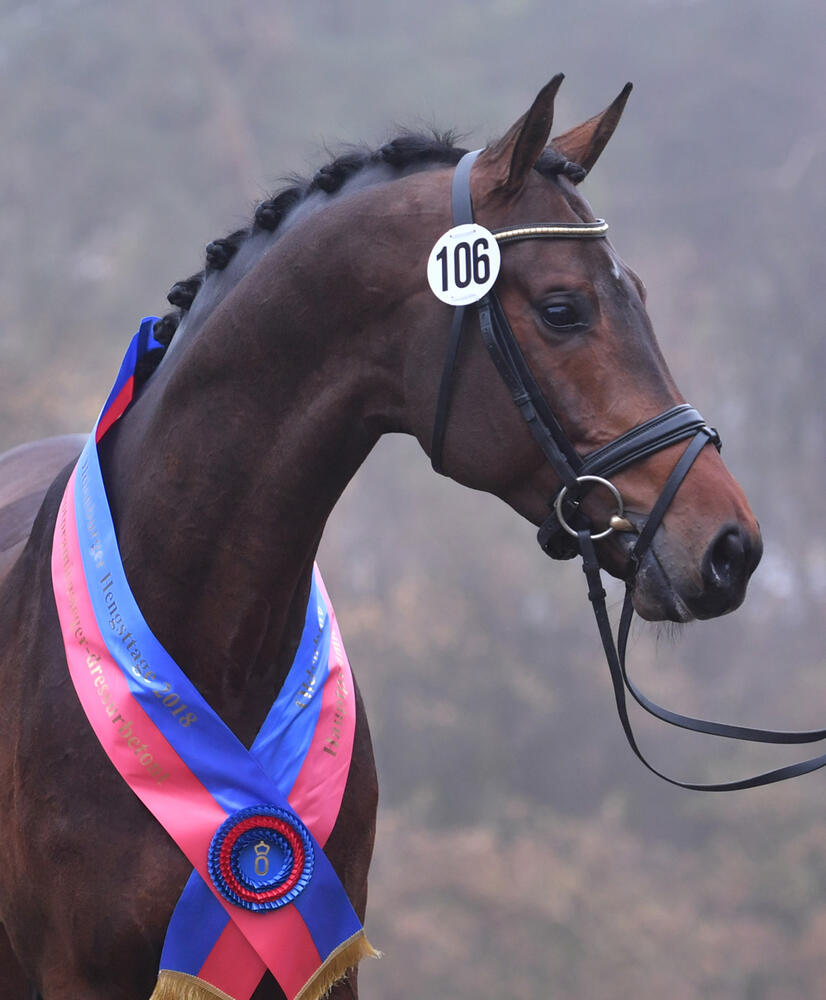 Two newcomers, Zackerey and Comme Prévu, shined as the celebrated Oldenburg main premium winners. When deciding which stallion is to receive a main premium, not only the stallion’s achievements in sport but also the result of his performance test and, even more important, the quality of his first foal crop, are deciding factors.

The main premium in the dressage sector went to Zackerey, born 2014, by Zack out of Overgaard’s Hit Me by Sandro Hit - Solos Carex, bred by Tove and Ove Möller Nörgaard, Denmark, and owned by Blue Hors Aps from Denmark. This movement king was licensed in Vechta 2016. The elegant dark-bay stallion finished his 14-day test with a final dressage score of 8.0. From his excellent first foal crop, Zackerey already delivered the beautiful filly Zara for the Elite Foal Auction this year, which was knocked down for a top prize.

The Ib main premium for stallions with focus on dressage was awarded to Finest Selection OLD, born 2014, by Follow Me out of Laetizia by Lauries Crusador xx - Donnerhall, bred by Heinz-Hermann Leismann from Tecklenburg, and owned by Dressurpferde Leistungszentrum Lodbergen, Löningen. Last year, the black stallion triumphed as the Bundeschampion as well as the Oldenburg State Champion of the three-year old stallions. The movement king finished his 14-day test in Adelheidsdorf with a final dressage score of 9.29. His sire Follow Me OLD was Champion Stallion of the Oldenburg licensing 2012, winner of his stallion performance test, State Champion and won the Ib main premium as well as his son now.

The third place went to Fürst Fabrice OLD, born 2014, by Fürstenball out of Casablanca by Sandro Hit - Castro, bred by Arnold Wegbünder, Nordhorn, owned by Adrian Gasser from Switzerland. The stallion was celebrated Oldenburg Champion Stallion 2016. Last year, he completed his 14-day test in Adelheidsdorf with the second highest final dressage score of 8.55, where he received the 9.0 for the trot and rideability. Fürst Fabrice OLDs sire Fürstenball OLD was Oldenburg Champion Stallion 2008, main premium winner 2010, Bundeschampion 2011 and is one of the most important masters of Furioso.

The victory at the main premium of the Springpferdezuchtverband Oldenburg-International (OS) went to Comme Prévu, born 2013, by Comme il faut out of Quintessa - Quinta Real - Balou du Rouet, bred by IB Berger GmbH from Sulzbach-Rosenberg, and owned by Gerd Sosath, Lemwerder. In 2016, the bay stallion completed his 50-day test in Adelheidsdorf as the best three-year old with a final jumping score of 8.99. Comme Prévu ranked under the top-ten this year in the first qualification at the German Bundeschampionat and was placed in the final. At the World Breeding Jumping Championships for Young Horses in Lanaken, Belgium, the stallion won both qualifications and placed in the final for five-year old show jumpers.

The silver medal of the jumping main premium award went to Chacfly, born 2012, by Chacco-Blue out of Shentara by Sir Shutterfly - Cento, bred and owned by Gestüt Lewitz, Mühlen. With the final score of 9.49, this athletic stallion finished his 50-day test in Adelheidsdorf. The maximum score of 10.0 was awarded in six individual criterias, the interior, character, motivation, ability, manner and overall impression. Chacfly was victorious several times in 1.30 m show jumping classes.

The third place went to two sires this year, Dia Corrado, OS, born 2014, by Don Diarado out of Corrada by Corrado II - Cento, bred by Lars Grafmüller, Rheine, and owned by Hengststation Tebbel, Emsbüren, as well as Checkter, OS, born 2013, by Cellestial out of Ilonka by Lord Pezi - Ile de Bourbon, bred and owned by Böckmann Pferde GmbH from Lastrup. Dia Corrado finished his 14-day test with a final jumping score of 9.43. In his sport test, he received the overall score of 8.65. His mother Corrada was also successful in high class jumping under breeder Lars Grafmüller. Checkter finished his sport test 2017 with a final score of 9.66. In his sport test this year he graduated with an overall score of 9.13. Checkter is already victorious in 1.30 m jumping tests. Dam Ilonka was also successful in high class jumping and gave birth to no less than the licensed and Grand Prix successful stallion Check In by Cordalmé under Samantha McIntosh as well as the 1.40 m successful Check Up by Cordalmé under Vincent Elbers.

Photo above: The main premium in the dressage sector went to Zackerey by Zack. (gr. Feldhaus)

Photo below: The victory at the main premium of the Springpferdezuchtverband Oldenburg-International (OS) went to Comme Prévu by Comme il faut. (gr. Feldhaus) 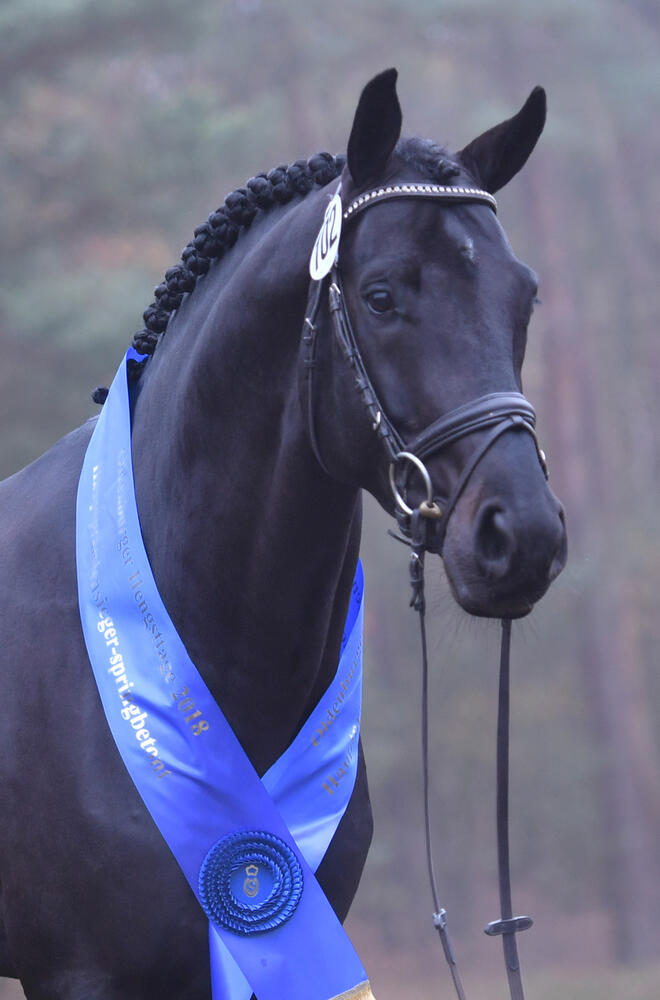