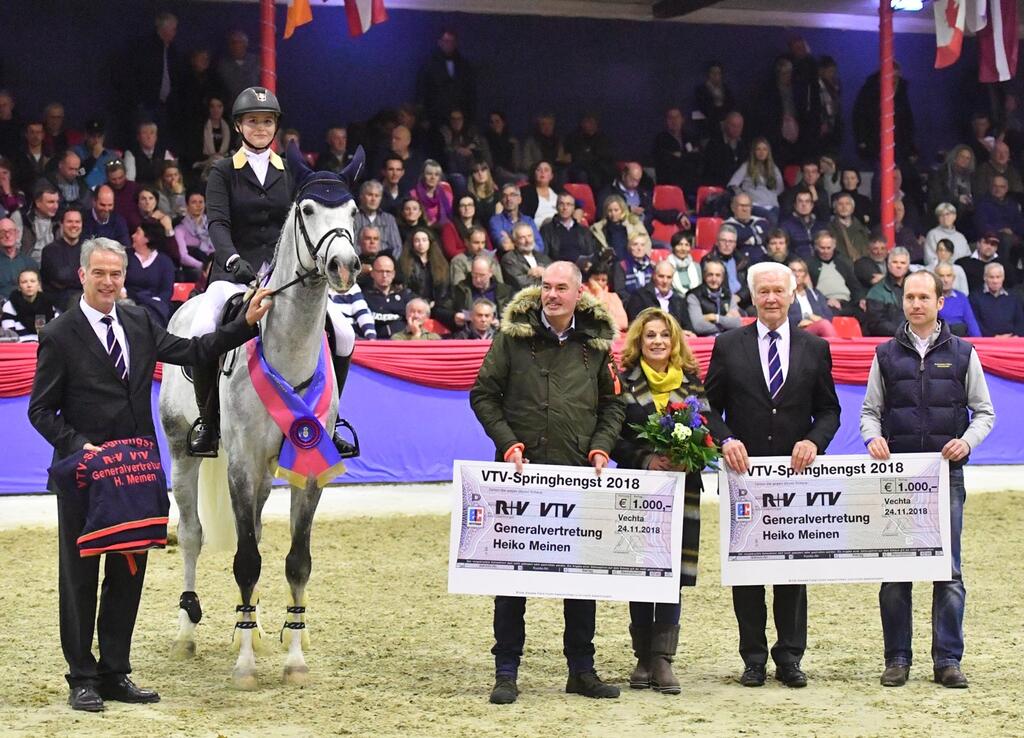 Honour to whom honour is due

Once again this year, upholding a long tradition, a VTV jumper stallion and a VTV dressage stallion were crowned during the Oldenburg Licensing. This highly prestigious award is given to a licensed, Oldenburg stallion for his outstanding achievements in sport and breeding. On the occasion of the Stallion Gala, the two athletes Spirit of the Age OLD and Diaron OLD were decorated with the VTV sash in the Oldenburg Horse Center Vechta.

Heiko Meinen, head of the R+V VTV General Agency, which is specialized in insuring animals, once again took the opportunity this year to reward the breeders Manuela Lachnit and Michael Mehrtens, as well as the owners Paul Schockemöhle and Bernadette Brune by handing each of them a generous check in the amount of 1000 Euro for their great achievements in breeding.

VTV Jumping Stallion
Diaron OLD, born 2012, by Diarado out of Lenda-Cara by Come On - Aldatus, bred by Manuela Lachnit, Nienburg, and owned by Paul Schockemöhle, Mühlen, inspired this year as well as last year with the title of the Bundeschampion of the five- and six-year old show jumpers in Warendorf under Patrick Stühlmeyer. Even as a foal, the grey stallion was able to convince with his elastic and great movements, as well as later in the free jumping. After first wins in 2016 in young horse show jumping classes with Basile Rubio, Patrick Stühlmeyer took over the further training of Diaron OLD in 2017. Due to his success in sport, he was licensed in the same year at the Springpferdezuchtverband Oldenburg-International (OS). Also this year the meteoric rise of the couple continued and so they celebrated already numerous successes in show jumping tests up to 1.35 m classes and became State Champion of the six-year old show jumpers on the Oldenburg Landesturnier in Rastede. His Mother Lenda-Cara, born 2002, by Come On out of Lindauway by Aldatus, bred by Manuela Lachnit, Nienburg, brought so far five successful competition horses, especially the large-framed grey Campitello, born 2002, by Concetto, successful under Alexander Hinz in international top classes, for example in Donaueschingen, Frankfurt, Stuttgart and Opglabbeek on four star level. Granddam Lindauway gave birth to six successful jumpers, including VDL Groep Miss Untouchable, born 2007, by Chacco-Blue, who attracted attention in 2017 at the CHIO in Aachen with several international placements under the Dutch Leopold van Asten. Also from this dam line, the 1.40 m successful Blue Balou by Balou du Rouet, ridden by Diarons breeder Manuela Lachnit, Balous Day Date by Balou du Rouet under Molly Ashe-Cawley, Pentagon by Padarco under Katharina Werndl, Tiger Lily by Balou du Rouet under Jessica Springsteen and Day Date by Domino with Beat Mändli in the saddle. On his sire’s side Diaron goes back to the Diamant de Semilly son Diarado, who can already register 70 successful advanced level horses, 43 licensed sons and 41 state premium mares in Germany. He was 2007 Champion Stallion of his licensing, won the stallion performance test one year later, secured the bronze medal at the Bundeschampionat of five-year old show jumpers with Bastian Freese and then went up to three star level in international top-level sport.

VTV Dressage Stallion
Spirit of the Age OLD,born 2004, by Stedinger out of Ultra Davenia by Donnerhall - Rohdiamant, bred by Michael Mehrtens, Jever, and owned by Bernadette Brune, Westerstede, started his career at the age of three and four with series victories in riding and dressage horse tests under Sascha Böhnke, before he was auctioned in Vechta and started his journey to New Zealand. There he paraded at the age of five to the New Zealand Champion. Back in Germany, the dark bay stallion was able to celebrate several podium finishes in medium class dressage tests in 2011 with Thomas Rive, before Bernadette Brune discovered the dressage talent at the Fall Elite Auction in Vechta 2012. With Spirit of the Age OLD, she soon succeeded in a meteoric rise in the German and international dressage scene: After the couple had won an Intermediaire I at the CDI** in Biarritz, France, for the first time in 2012, the stallion managed effortlessly to jump into the Grand Prix class and also celebrated at the CDI***Biarritz his first Grand Prix victory one year later. Due to his many successes in the advanced level class, the imposing Spirit of the Age OLD 2012 was licensed for Oldenburg. The formerly highly successful show jumper Bernadette Brune continued to build up her stallion, so that in 2015 was followed by their first Nations Cup participation at the CDIO*** Vidauban, in which the pair significantly contributed to the victory of the German team with the bronze medal in the Grand Prix. Also at the CDIO***** in Rotterdam, Netherlands, the duo delivered a top ten ranking and was pleased about their first participation in the World Cup in Lyon, France. In the same year, the couple was appointed to the perspective squad due to his achievements and Spirit of the Age OLD was named the most successful Oldenburg horse in Germany. He ranked sixth in the world. After more than 20 placings in 2016, the stallion and his rider delivered also one success story after the another in 2017. One of their highlights this year was the ribbons at the CDI**** shows in Dortmund and Hagen a.TW. in Grand Prix and Grand Prix Special. His sire Stedinger became Champion Stallion of the Oldenburg Stallion Days in 2002 and two years later became the first Reserve Champion of the main premium. In 2013, the dark bay moved to Australia where after only a few months he was able to win dressage tests up to Intermediaire I and also became Australian Champion in 2014. Stedinger has been one of the top international sires for years and in 2017 ranked eighth in the WBFSH list of the best dressage sires worldwide.

Photo below: VTV Dressage Stallion 2018 Spirit of the Age OLD by Stedinger under his owner Bernadette Brune. (gr. Feldhaus) 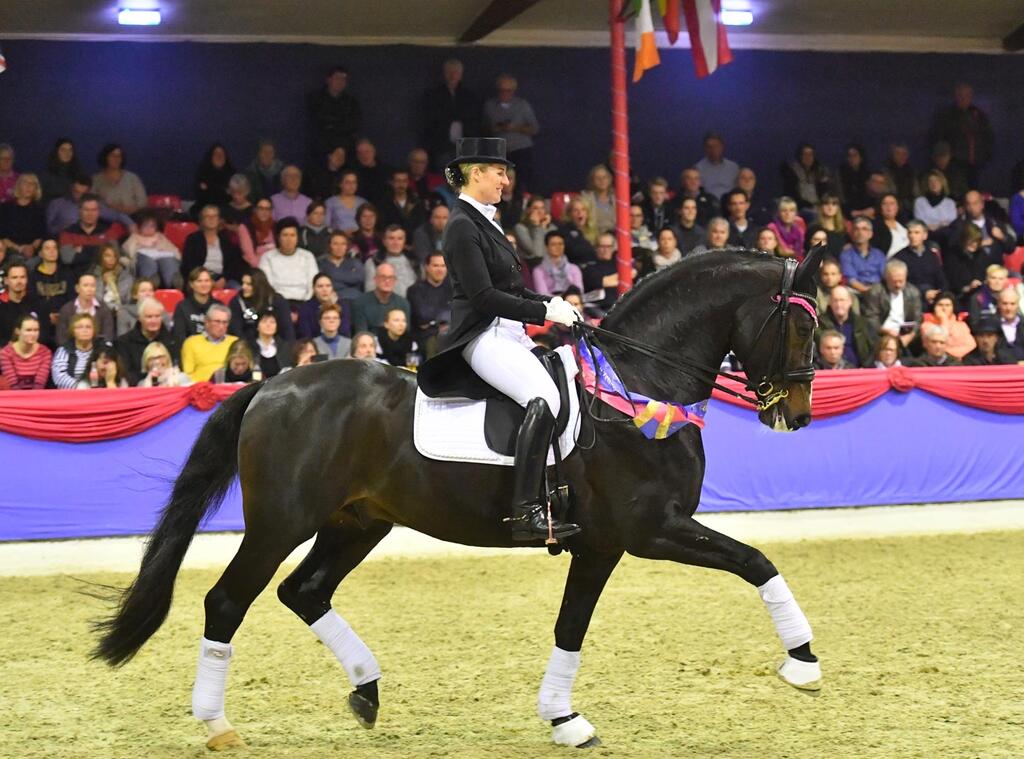