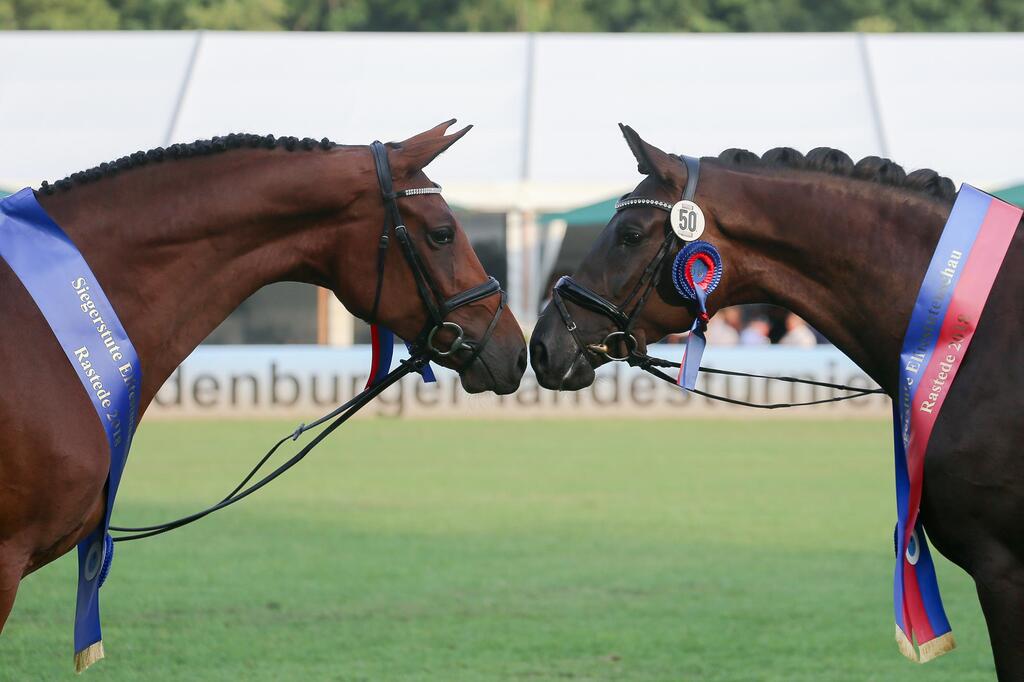 The 13th Oldenburg Elite Mare Show was recently held in Rastede on the beautiful grounds of Rastede Castle. Several mares from Rastede have already made the leap to the international level, and great careers are predicted for this year's elite mares as well.

In the Brillantring of the Verband der Züchter des Oldenburger Pferdes (OL), there was no passing Venecia, born 2015, by Van Vivaldi out of Florencia by Florencio I - Depardieu, bred and owned by Bernd Schlüter, Müssen. "Venecia has been my undisputed favorite from the start. She has an inner calm, a charisma typical of her breed and a powerful push-off through her body from the back. I am sure that we will be seeing much more of her," said Oliver Oelrich, national trainer for the U25 dressage riders and Oldenburg Elite Mare Show correspondent. This elegant mare achieved an overall score of 8.91 in her performance test. Venecia is a descendent of Duftgut on the dam side, of a famous show dynasty.

In dressage mares, silver went to Feymar, born 2015, by Prince's Ball out of Weltina by Weltmeyer - Bolero, bred by Matthias Böckermann, Damme, and owned by Klaus Gustenberg, Osnabrück. This jet black mare has no less than Oldenburg's multi-champion Fürstenball OLD for sire, licensing winner, stallion performance test winner and champion of the Bundeschampionat for five-year-old dressage horses in 2011. The reserve champion is of the renowned Duellheldin line on the dam side, which also produced the select stallions Garibaldi I and II as well as Wolkenstein I and II.

Bronze went to Elektia's Romance, born 2015, by For Romance I out of Elea Doreen by Sir Donnerhall I - Dream of Love, bred and owned by Theo Fugel, Saterland. Dam Elea Doreen also appeared at the Rastedes castle grounds in 2008. Granddam Elektia's Dream also produced the 2011 I-c premium winner, Escada by San Amour I, and the 2009 winner, Sweet Pepper by Sir Donnerhall I.

At the Springpferdezuchtverband Oldenburg-International (OS), Chrystal, born 2014, by Cola Zero out of Volle Freude by Voltaire - Calypso II, bred by Anne Haase, Fischerhude, and owned by BG Stevens & Haase, Molbergen, was crowned top mare, receiving a perfect score of 10.0 for free jumping in her performance test. Her dam, Volle Freude, won medium level jumping tests under Thomas Heineking, and placed tenth in the Bundeschampionat for five-year-old jumpers in 2005. "I can hardly express in words how happy I am that my mare emerged as the winner. She's an outstanding jumper. I want to especially thank my friend Erich Stevens, who selected Cola Zero as stallion for Volle Freude back then. His instincts turned out to be good," exclaimed breeder Anne Haase.

Reserve champion in the jumper class for mares was Khedira, born 2015, by Toulon out of Käthe Kruse by Contendro I - Le Cou, bred and owned by Günther Wendeln, Garrel. Her score in free jumping was 9.5. Granddam Kaira's foal Contable by Couler-Rubin also enjoyed success up to the advanced tests under Werner Kleimann.

A perfect hat trick: The I-c premium went to Renomme, born 2015, by Cornet Obolensky out of Rominarda by Dinard L - Ramiro's Son, bred and owned by Hermann Kuck, Rastede. Here, she follows in her sisters' hoofsteps — Rilana by Colestus shone as reserve champion at the Brillantring, and Riviera by Cellestial was I-c premium winner last year. Her dam Rominarda shone at Rastede as well in 2001. She also produced the mares Candela K and Coryphae, both successful at the international advanced level and both by Cornet Obolensky, and the Bundeschampionat finalist Chancy K by Cristallo I. Renomme, a jumping powerhouse, received a perfect 10.0 score in her free jumping performance test.


Here you can find all results from the Brillantring: