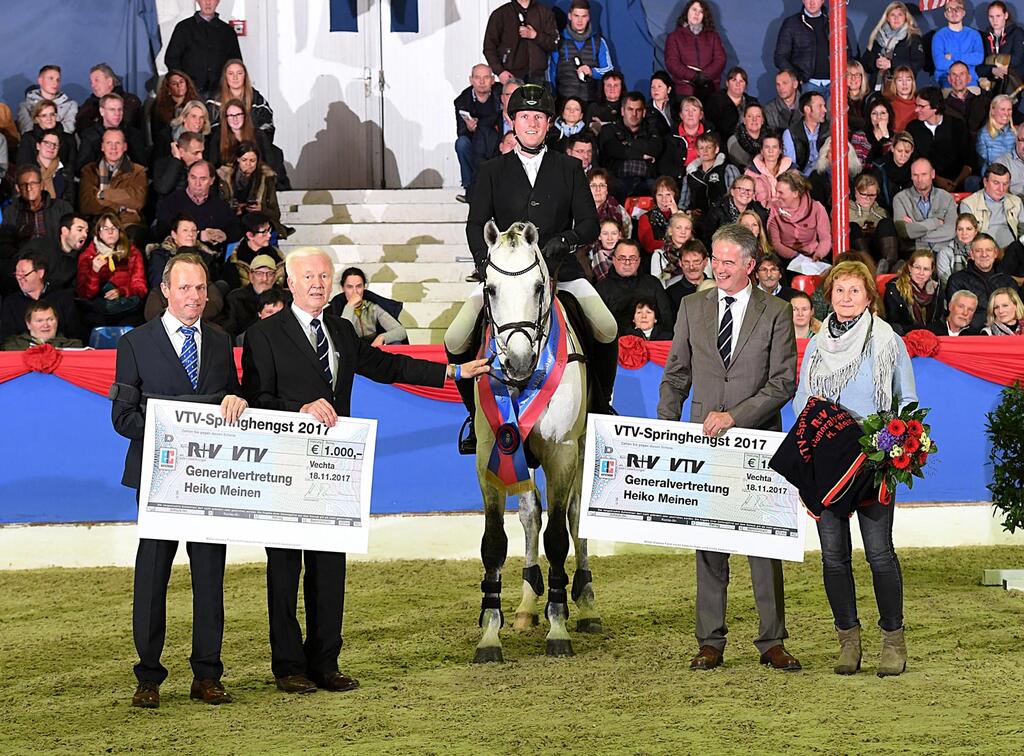 VTV Stallions of the Year

Once again this year, upholding a long tradition, a VTV jumper stallion and a VTV dressage stallion were crowned during the Oldenburg Licensing. This highly prestigious award is given to a licensed, Oldenburg stallion for his outstanding achievements in sport and breeding. On the occasion of the Stallion Gala, the two athletes Casino Berlin and Fürst Wilhelm were decorated with the VTV sash in the Oldenburg Horse Center Vechta.

Heiko Meinen, head of the R+V VTV General Agency, which is specialized in insuring animals, once again took the opportunity this year to reward the breeder and owner of Casino Berlin, Gerd Sosath from Lemwerder, and Wilhelm Meiners from Werlte, or more specifically, Gestüt Sprehe GmbH in Benstrup, the owner of Fürst Wilhelm, by handing each of them a generous check in the amount of 1000 Euro for their great achievements in breeding.

VTV Jumper Stallion of the Year
Casino Berlin, born 2008, by Caspar out of Landora by Landor S - Carolus - Grandeur, bred and owned by Gerd Sosath, Lemwerder, who has meanwhile reached ****-star level, drew attention in sport in the year 2017 mainly because of his top placings, including in Rastede, Paderborn and, most recently at the CSI*** in Oldenburg under the breeder’s and owner’s son, Hendrik Sosath. The gray stallion began his career in 2010 when he took the 1-e premium when he was licensed in Vechta. A year later at the same venue, he was awarded the I-c main premium for the outstanding quality of his first foal crop. After successfully passing his performance test in Redefin, where he was awarded a 9.0 for his free jumping, he performed well in 2012 under Gerd Sosath as well as his son Hendrik, taking top placings in the few tests for young show jumpers that he entered. In 2013 he received scores up to 9.0 for the show jumping courses he finished and qualified for the Bundeschampionat in Warendorf. In the following year as well, he again immediately qualified for the Bundeschampionat in the class for six-year olds and also placed in 1.40 m show jumping tests. That same year, under his breeder and owner, he took the Oldenburg Vice Champion title in the class for six-year old show jumpers in Rastede’s Schlosspark. In 2015 he took his first placings in advanced level show jumping classes, for example at the Youngster Championships in Warendorf and at the Hamburg Derby with Hendrik Sosath in the saddle. When he turned eight, Casino Berlin also proved his class in international, advanced level show jumping competitions, taking second place in the Grand Prix of the CSI Steinhagen. The gray stallion’s performance in sport was not his only convincing trait; his quality as a sire was also evident. In 2014, his first son, Casino Grande, was licensed by Springpferdezuchtverband Oldenburg-International where he took the second Reserve Champion title.

VTV Dressage Stallion of the Year
This year, the award of the VTV Dressage Stallion of the Year title went to Fürst Wilhelm, born 2006, by Fürst Heinrich out of Lady Scarlett by Sandro Hit - De Niro, bred by Wilhelm Meiners from Werlte, and owned by Gestüt Sprehe GmbH in Benstrup, who won the Intermediaire I and Prix St. Georges in Vreschen-Bokel under his rider, Kristin Biermann. Fürst Wilhelm was licensed in Vechta in 2008 and knocked-down afterward at the Stallion Market to Gestüt Sprehe. As a six-year old, the good-sized, black stallion qualified for the Bundeschampionat in Warendorf, where he finished sixth in the Final under Lukas Fischer. After just a few weeks in the saddle of this stallion, Kristin Biermann was able to celebrate a victorious debut that same year with her “Matcho”. In breeding, the stallion had sired six licensed sons by the time he was eleven. His first two sons were licensed in the fall of 2014, including the Reserve Champion as well as Fürst William HC, who is meanwhile a highly decorated State Champion and Bundeschampion. In 2015, at the licensing in the Oldenburg Horse Center Vechta, a black stallion named Fair Game stood out, who then proceeded to win his stallion performance test and now brings joy to Birkhof, owned by the Casper family in Donzdorf, located in Baden-Württemberg. In the scope of the Westphalian licensing, a true to type, strong moving, liver chestnut, Oldenburg son named Festivo was licensed and at the KWPN licensing in 2016 another son named Frascino. At the 83rd Fall Elite Auction held at the Oldenburg Horse Center Vechta, a Fürst Wilhelm son named Furtwängler was the highest priced horse, coming with a price tag of 135,000 Euro. Soon afterwards, at the Spanish Championships for young dressage horses in Valencia, Spain, Furtwängler took the silver medal in the class for five-year old dressage horses under Juan Antonio Pérez Pulido.


Photo: from left to right: Casino Berlins breeder and owner Gerd Sosath, Wilhelm Weerda, president of the Oldenburger Pferdezuchtverband, Casino Berlin with Hendrik Sosath in the saddle, Heiko Meinen from the R+V VTV-Versicherung and the wife of the breeder Inga Sosath. (Beelitz)