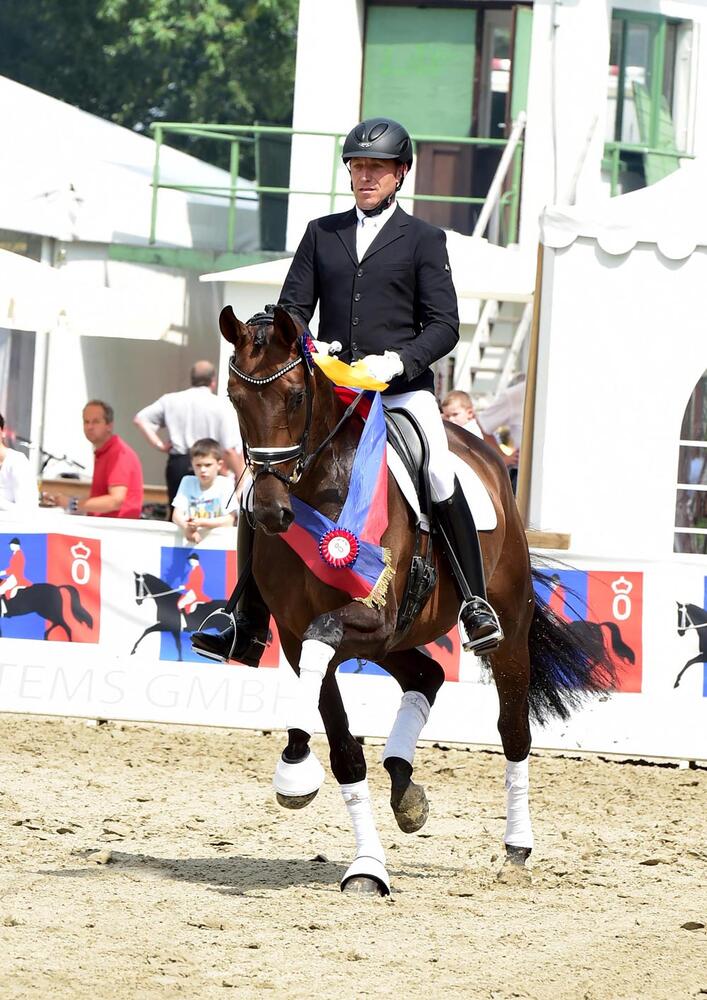 One of the highlights at this year’s Summer Mixed Sales which will be held on Saturday, June 3rd, at the Oldenburg Horse Center Vechta, is a colt named Indian Summer, Cat. No. 24, who is a brother of State Champion and Vice Bundeschampion, Fame W OLD.

Indian Summer by Indian Rock (by Apache - Vivaldi) - Lauries Crusador xx - Grand Cru is a stallion prospect of special class. His dam Lola also produced an elder half-sister, State Champion and Vice Bundeschampion Fame W OLD, born 2010, by Fürstenball OLD, who competed in Rastede’s Brillantring in 2014 where she received the I-e premium. Indian Summer will rock the scene with his graceful lightness of movement. His sire, the KWPN licensing winner Indian Rock, who makes his debut as a sire this year, has a bloodline connection to Krack C, Anky van Grunsven’s Grand Prix star. The dam line is also the origin of a successful Grand Prix horse named Diamond Tyme by Diamond Hit, ridden by the Canadian Julie Watchorn, as well as a licensed stallion named Classic Juan by Crazy Classic.

Also from a highly decorated family is Idrissimo by Ibiza (Desperado - Jazz) - Belissimo M - Londonderry. Idrissimo is a representative of Ibiza’s first crop. His dam line goes back to the Olympic dressage queen Wansuela Suerte by Warkant, ridden by Hubertus Schmidt, as well as the Grand Prix winning Lesotho by Lauries Crusador xx with Ellen Schulten Baumer in the saddle and the stallions Baryshnikov by Bolero, San Remo by Sandro Hit and Londonbeat by Lauries Crusador xx.

Take a look at a trailer of the Elite Foals here.

You can also order a printed catalogue from the Auction Office Vechta.

It is also possible to purchase your favorites by phone. Please get in touch with one of the Oldenburg Auction Office employees named below.

Photo: Foto: State Champion and Vice Bundeschampion Fame W OLD by Fürstenball OLD with Johannes Westendarp in the saddle, is the sister of Cat. No. 24 Indian Summer by Indian Rock. (Beelitz)