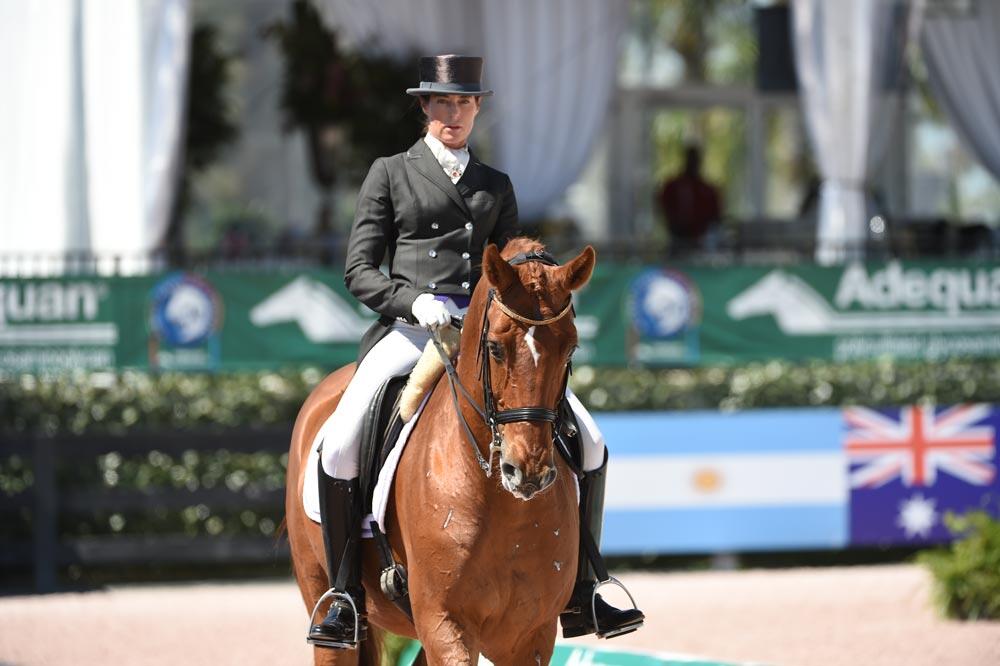 At the Palm Beach Derby in Wellington the Oldenburg dressage horses convinced with victories and top placements. Many former Oldenburg auction horses led the honor round.

Copernico TM, born 2010, by San Amour I out of Gestiane by Don Gregory, bred by Zuchtstall Kotschofsky GbR, Visbek, Germany, and owned by Juan Matute, Spain, won the preliminary test as well as the final test for seven-year-old dressage horses under Juan Matute Guimon. Copernico's brother is the licensed stallion Saint Michel. Copernico was discovered at the Spring Elite Auction 2015 in Vechta.

Dimacci DC, born 2007, by Dimaggio out of Karubina by Rubinstein I - Admirand, bred by Rosemarie Bölts, Edewecht, Germany, and owned by Susan Dutta, USA, took sixth place in an Intermediate I with Susan Dutta in the saddle. Dimacci DC comes out of the dame line of the Kateste. This dam line is also the origin of US-Champion Folkestone OLD by Fidertanz under Christina Vinios.

Doktor, born 2003, by Diamond Hit out of Gurena by Renoir I - Apollo xx, bred by Dr. Heiko Meinardus, Stadland, Germany, and owned by Patricia A. Stempel, USA, and his rider Shelly Francis ranked third in a Grand Prix and a Grand Prix Freestyle. Doktor began his career as a foal at the 2003 Fall Elite Auction in Vechta. His dam Gurena is also the dam of a licensed stallion named Dargento by Don Romantic who sold to customers from Great Britain at the 2008 Fall Elite Auction. This mare family is also the origin of Sir Oldenburg by Sion, a premium stallion.

Don Akzentus, born 2002, by Donnerhall out of Wiener Melange by Akzent II, bred by Astrid Brabant-Stahl, Ahrensburg, Germany, and owned and ridden by Taryn Hartnett, USA, won silver in an Intermediate I and took fourth place in a Prix St. Georges. Don Akzentus was 2004 licensed in Vechta, Germany.

Fiderhit OLD, born 2008, by Fidertanz out of Fleur by Sandro Hit - Figaro, bred by Josef Gramann, Vechta, Germany, and owned by Michael Davis, USA, and Barbara Davis won the individual dressage test for Young Riders as well as the Freestyle and took silver in the team test, a Prix St. Georges for Young Riders. Fiderhit OLD starts her career as a foal at the 2008 Summer Mixed Sales in Vechta, Germany.

Finally Love, born 2006, by Farewell III out of Winzerin by Harvard, bred by Raimund Vorwerk, Lohne, Germany, and owned by Gabriela Stumpf, Austria, led the honor round in an Intermediate II for Amateur as well as the Grand Prix for Amateur with Gabriela Stumpf in the saddle.

Largo, born 1999, by Ligretto out of Aura by Arogno/Trakehner, bred by Hans-Arnold Meyer, Hollern, Germany, and owned by Eliza Gardner, USA, and his owner took fifth place in the individual dressage test for Young Riders as well as the Freestyle and took fourth place in the team test, a Prix St. Georges for Young Riders. Dam Aura gave birth to the advanced level dressage horse Rachmaninov S by Rubinstein I under Willy Schetter.

Nymphenburg’s Sylvester, born 2008, by Sir Donnerhall I out of Wenzel’s Rubin by Rubinstein I - Wenzel I, bred by Gründel + Köchling, Immenhausen, Germany, and owned by Laurie Kylee, USA, and Katie Johnson took sixth place in a Prix St. Georges and an Intermediate I Freestyle test. Nymphenburg’s Sylvester starts his career at the Fall Elite Auction 2011 in Vechta, Germany. Granddam Wenzel-Prinzess also gave birth to the advanced level dressage horses Royal Silver by Royal Diamond under Ina Leuser and Gloria by Gambler’s Cup xx with Marc Büker in the saddle.

Rigaudon Tyme, born 2004, by Rosario out of Carmen by Calypso II, bred by Heide-Marie Merkhoffer, Germany, and owned by Evi Strasser, Canada, got placed fifth in a Intermediate I Freestyle test and sixth in a Prix St. Georges under her owner Evi Strasser from Canada. Rigaudon Tyme was discovered at the Summer Mixed Sales 2007 in Vechta. He is a brother of Fabienne Lütkemeiers Grand Prix horse Qui Vincit Dynamis by Quattro B.

Are you looking for your next dressage star? Then have a look at the outstanding collection of the 86th Spring Elite Auction on April 1st at the Oldenburg Horse Center Vechta and secure your own talented youngster. Here you’ll find an overview of the entire collection.

Photo: Finally Love by Farewell III and Gabriela Stumpf are winning Grand Prix tests in Wellington in a row.