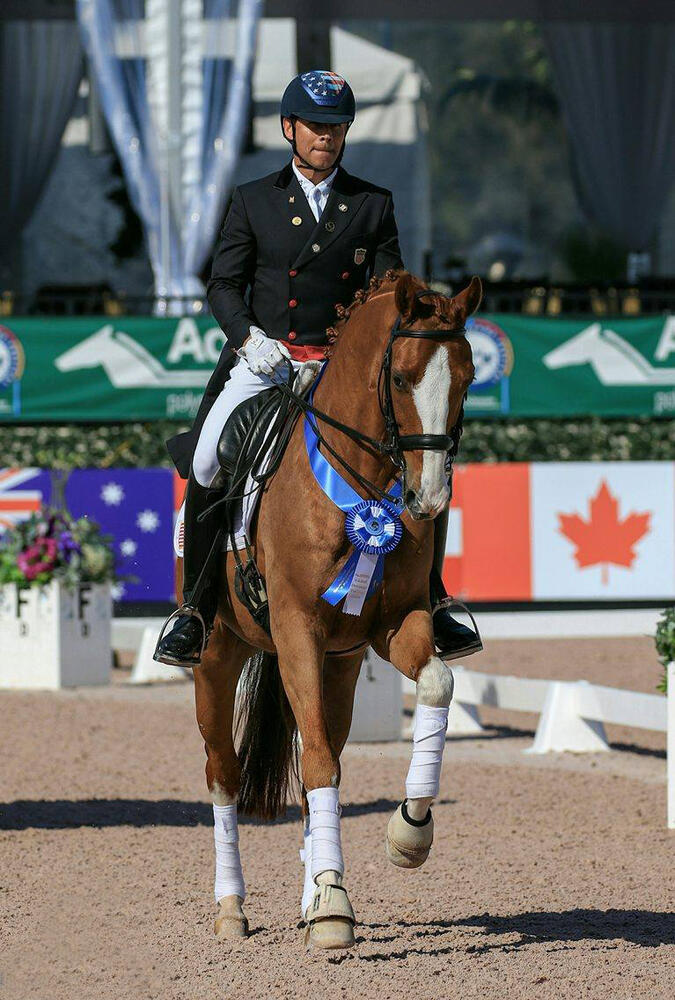 The Oldenburg dressage horses were outstanding successful at the international dressage competitions. They won dressage tests at the CDI*** in San Juan Capistrano, California, at the CDI*** in Wellington, Florida, and placed at the CDI in Werribee, Australia.

Belissima, born 2004, by Belissimo M out of Walzerlied by Donnerhall, bred by Heinz and Elisabeth Schulte, Ahlen, Germany, and owned by Joanne Trout, USA, took fourth place in an Intermediate I Freestyle in Wellington as well as fifth place in a Prix St. Georges under her rider Neve Myburgh.

Doktor, born 2003, by Diamond Hit out of Gurena by Renoir I - Apollo xx, bred by Dr. Heiko Meinardus, Stadland, Germany, and owned by Patricia A. Stempel, USA, and his rider Shelly Francis ranked second in a Grand Prix Special and a Grand Prix Freestyle. Doktor began his career as a foal at the 2003 Fall Elite Auction in Vechta. His dam Gurena is also the dam of a licensed stallion named Dargento by Don Romantic who sold to customers from Great Britain at the 2008 Fall Elite Auction. This mare family is also the origin of Sir Oldenburg by Sion, a premium stallion.

Don Akzentus, born 2002, by Donnerhall out of Wiener Melange by Akzent II, bred by Astrid Brabant-Stahl, Ahrensburg, Germany, and owned and ridden by Taryn Hartnett, USA, placed fourth in an Intermediate I and took fifth place in a Prix St. Georges. Don Akzentus was 2004 licensed in Vechta, Germany.

Fiderflame, born 2010, by Fidertanz out of Ascona by Abanos, bred by Dr. Winfried Heitz, Lindlar, Germany, and owned by Ariana Chia, Canada, became second in the seven-year-old preliminary test as well as in the final for seven-year-old dressage horses under his owner Ariana Chia.

Finally Love, born 2006, by Farewell III out of Winzerin by Harvard, bred by Raimund Vorwerk, Lohne, Germany, and owned by Gabriela Stumpf, Austria, led the honor round in an Intermediate II for Amateur as well as the Grand Prix for Amateur with Gabriela Stumpf in the saddle.

Laurencio, born 2007, by Laurentio out of Pasadena by Donnerhall - Pygmalion, bred by Petra and Hans-Christ. Grupe, Bad Zwischenahn, Germany, and owned by Tina and Jaimy Irwin, Canada, led the honor round in Wellington in a Prix St. Georges, in an Intermediate I as well as an Intermediate I Freestyle with the Canadian Tina Irwin in the saddle. Granddam Patina gave birth to the advanced level dressage horse Dream Boy by Donnerhall under Annette Wallenborn.

Quincy, born 2008, by Quarterback out of Brentina by Brentano II, bred and owned by Jennifer Mason, USA, took second place in a Prix St. Georges and third in an Intermediate I with Nicholia Clarke in the saddle in San Juan Capistrano. Quincy is a brother of Finesse by Festrausch. Dam Breanna is successful in Grand Prix classes under Kathleen Raine. The dam line is also the origin of the licensed stallions San Brasil by Sao Paulo, Euro Sport Cent by Escudo I, and Los Angeles by Light On.

Robbie W, born 2003, by Rubin-Royal out of Rolling Home by Inschallah AA, bred by Theo Büter, Bunnen, Germany, and owned by Diane Creech & Louise Leatherdale, Canada, won an Prix St. Georges in Wellington with Diane Creech in the saddle and took second place in an Intermediate I Freestyle and third place in an Intermediate I. Dam Rolling Home also gave birth to Dexter by De Niro, who won ribbons up to advanced level dressage tests under Tanja Schmidt.

Royal Oak II, born 2004, by Royal Olymp out of Desiree by Welt Hit II, bred by Dietmar Scheibert, Oldenburg, Germany, and owned by Kate Barton, Australia, placed third in a Grand Prix under Deon Stokes and fifth in a Grand Prix Freestyle. The stallion was licensed 2006 in Vechta.

Rubin Cortes OLD, born 2001, by Rubin-Royal out of Carmen by Calmiro, bred by Arsene Weiler, Luxembourgh, and owned by Gestüt Sonnenberg & Barbara Bertschinger, Switzerland, and his owner Barbara Bertschinger took fourth place in a Grand Prix Special. The career of Rubin Cortes OLD started in the year 2003 at the stallion licensing where he became the reserve champion. 2006 Rubin Cortes OLD won at the Oldenburg Landeschampionat in Rastede under Hendrik Lochthowe. He is father of two approved sons and various successful dressage horses. His son Rubin Dark out of Dunja by Don Gregory - World Cup I is successful in advanced level dressage tests under Svenja Bachmann from Germany.

Sergio Leone, born 2008, by Sir Donnerhall I out of Sinfonie v.d. Heide by Stedinger, bred by Manfred Rüter, Dorsten, Germany, and owned by Ann Romney, USA, took third place under Jan Ebeling in a Prix St. Georges as well as fourth place in an Intermediate I and Intermediate I Freestyle in San Juan Capistrano. Dam Sinfonie v.d. Heide is successful in advanced level dressage tests under Susanne Peter.