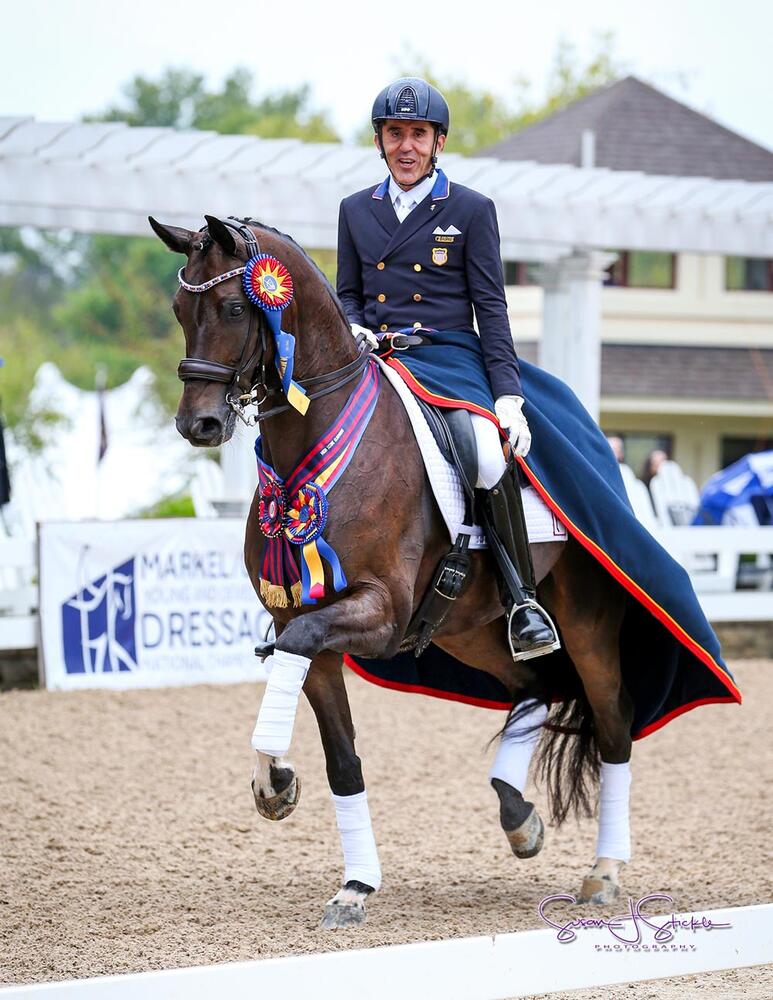 At the American Championships for young dressage horses which took place at the Lamplight Equestrian Center in Wayne, Illinois, two Oldenburg bred horses were in front.

Celebration, born 2013, by Coeur d’Amour out of Rhythm-n-Blues by Rosenthal, bred by High Point Hanoverians, USA, and owned by Kimberly Dougherty, and her owner took third place in the four-year old Championship. "I was worried she was going to come out today and be tired but she came out with more power and was actually fresh, which was exciting as I wasn't worried about her being lazy in there. I thought overall she was super today and I had more power than I had two days ago. She was rideable and I am really happy with her”, said her rider Kimberly Dougherty.

Fairouz, born 2013, by Franziskus out of Diva by Don Frederico - Wittinger, bred by Bramall/Dusche GbR, Germany, and owned by Alice Tarjan, and her owner took silver in the four-year old Championships. Fairouz received the Oldenburg Award, as the top placing Oldenburg in this class. “Her canter work was better, so I was happy. The judges really liked her trot, so that was great. I thought I was giving away a lot of points on little things, but, luckily, the judges are forgiving because she is four, which makes sense,” said Tarjan.

Fashion Designer OLD, born 2008, by Faustinus out of Forst-Design by De Niro - Rubinstein I - Argentinus, bred by Heike Kind, Germany, and owned by Martin T. Sosnoff & Dr. Cesar Parra, won the Developing Horse Grand Prix National Championship with Dr. Cesar Parra. “I’m very proud and thankful to be a part of this horse’s development. He has already achieved so much success- winning in Germany and excelling in the Five-Year-Old, Six-Year-Old, and Developing Prix St. George divisions here at Lamplight. After watching him develop and progress so well through the levels, to reach this accomplishment is so rewarding. And there’s so much more to come – I know he’s capable of even more than we have seen from him so far, and I’m really excited to continue on this path, to continue his development, and see what else he is capable of achieving. There are so many people, both here in the USA and in Europe that have been instrumental in Fashion's success. I am so very grateful,” remarked Parra. Last year, Parra and Fashion Designer OLD won the Reserve Champion title in the Developing Prix St. Georges division. As the cherry on top of a phenomenal weekend for the pair, the stellar dressage mount also received the Oldenburg Breeders' Horse Society award for the highest score of an Oldenburg in the division. With Jever Fun by Jazz Time the dam Forst-Design brought another successful offspring at advanced level.

Finery, born 2011, by Fürstenball out of Sanetta by Diamond Hit - Sandro, bred by Otto Langemeyer, Germany, and owned by Anne Howard, and Michael Bragdell finished third overall with a score of 7.6 at the six-year old Championships. The combination finished third in Friday’s preliminary test with a 7.6, replicating their score and position in the final test to finish in the top-three. “He held it together and stayed focused through the test,” said Bragdell. “I really couldn’t have asked him for anymore. I was just so proud of him. It is fun to come here and be here with all the great competitors. It really gives it a championship feel. I am just so proud that we made it this far and competed here.” 2014 Finery was licensed in Vechta and sold over the Spring Elite Auction into the USA. Dam Sanetta also gave birth to the licensed Don Gigolo by Dimaggio as well as the advanced level dressage horse Double D by Dimaggio under Eva Möller and Martin Christensen.

Qredit Hilltop, born 2008, by Quaterback out of Dream Rubina by Dream of Glory - Rubinstein I, bred by Judy G. Yancey, USA, and owned by Hilltop Farm Inc., took sixth place in the Developing Horse Grand Prix National Championship under Michael Bragdell. 2011 the stallion was licensed in USA. Granddam Reina H is the dam of a licensed stallion named Sirringo by Sir Donnerhall I.

Ravenna, born 2011, by Sir Donnerhall I out of Romanze by Romanov Blue Hors - Don Schufro, bred by Britta Lübbers, Germany, and owned by Andrea Woodard, won under her owner the six-year old Championship. They already won the preliminary test on Friday with a score of 7.9. The combination only improved, scoring the only 8 in the final test and winning handedly with an 8.3 and overall score of 8.1. “It feels wonderful of course. This is what I have been building up towards for such a long time now,” said Woodard. “I’ve had my eyes on this championship. She actually qualified as a five-year old, but I didn’t feel like she was mentally ready to take this long trip. This year, I felt like she was much more prepared and mentally ready, so I went for it and it paid off. I am super excited and very happy with her.” Ravenna also received the Oldenburg Award, given to the highest scoring Oldenburg of the class by the Oldenburg Horse Breeder’s Society.

Rosalut NHF, born 2010, by Rosenthal out of Legacy by Salut - Magnet, bred by Margaret Neider, USA, and owned by Nikki Taylor-Smith, won bronze at the Developing Prix St. Georges Championship under Carly Taylor-Smith. They scored a 70.43% in Thursday’s preliminary test, winning the class, and a 68.72% in Saturday’s test, placing sixth. She also received the Oldenburg Breeders' Horse Society award for the highest-placed Oldenburg in the class and the U.S. Bred Award, given to the top U.S. bred horse in each division. “[Rosalut NHF’s] biggest quality is that he is a born performer and every time I take him out, he just loves to show off to people,” said Taylor-Smith. “I had a pretty good ride I thought. Overall, the quality of my work felt really good. He was really soft so we are on the road to hopefully having the end result be the Grand Prix. This is a great stepping stone – I am very, very happy.” Rosalut NHF already won the U.S. Championships of the four- and five-year old dressage horses.