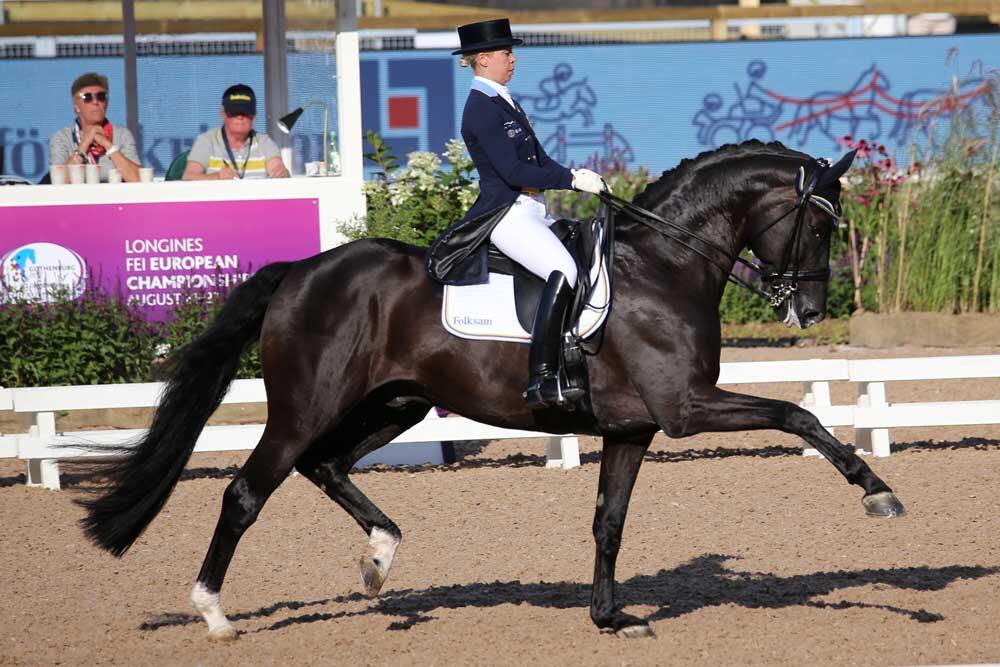 Gold and Bronze for Oldenburg

The German dressage riders sovereignly won team gold at the European Championships in Gothenburg, Sweden, ahead of Denmark and Sweden. The best couple in the entire starting field for the Grand Prix was Weihegold OLD and Isabell Werth.

Weihegold OLD, born 2005, by Don Schufro out of Weihevoll by Sandro Hit - Figaro, bred by Inge Bastian from Bargteheide and owned by Christine Arns-Krogmann from Lohne, took gold under Isabell Werth with the German team at the European Championships in Gothenburg. The successful duo effortlessly danced their way to the top among their strong competitors in the Grand Prix with a lead of more than five percent. Weihegold OLD took the Champion Mare title in 2008 at the Elite Broodmare Show in Rastede. In 2009 she and Kira Wulferding took bronze at the Bundeschampionat in Warendorf. In 2010 the couple placed in the Final of the World Championships for young dressage horses in Verden. Weihegold OLD is from the successful Weissena line.

To their delight, Sweden finished the European Championships in Gothenburg with the bronze medal in dressage. Dante Weltino OLD and Delaunay made decisive contributions to this success. These two Swedish championship horses were discovered as foals at Elite Auctions in Vechta. If you would also like to secure a champion, then take a look at our current collection in the Elite Foal Auction that will be held on Saturday, August 26th at the Oldenburg Horse Center Vechta.

Dante Weltino OLD, born 2007, by Danone out of Rihanna by Welt Hit II, bred by Olaf Bahls from Voigtsdorf and owned by Dressurpferde Leistungszentrum Lodbergen GmbH in Löningen, danced under his Swedish rider, Therese Nilshagen. They were the best Swedish couple, taking team bronze. The couple took seventh place with more than 74 percent in the Grand Prix. In 2007 Dante Weltino paraded under the name Danny in the foal collection at the Fall Elite Auction. He changed hands there for 17,000 Euro. In the year 2009, the colt took the Reserve Champion title at the Oldenburg licensing and was knocked-down at the following Oldenburg Stallion Market to Dressurpferde Leistungszentrum Lodbergen for 130.000 Euro. Dante Weltino‘s granddam Riconess by Noble Roi xx is also the dam of Riwera de Hus by Welt Hit II who competed in the Olympic Games of London for France under Jessica Michel as well as the 2004 Bundeschampion of six-year old show jumpers, Lumos by Lordanos ridden by Andreas Brünz who meanwhile wins top level, international show jumping competitions.

Delaunay, born 2006, by Dr. Doolittle out of Fara by Feinbrand, bred by Ulrich Brinkhus from Drantum and owned by Patrik Kittel & Carol and Andrew Oatley from Sweden, took eighth place with Patrik Kittel in the Grand Prix with more than 73 percent. As the second best Swedish couple, they also decisively contributed to winning bronze. Delaunay was also discovered as a foal at the 2006 Fall Elite Auction in Vechta. Just like the licensed stallions Diamonit I and II by Diamond Hit as well as Fackeltanz OLD by Florencio I, he comes from the famous Fackila mare family.