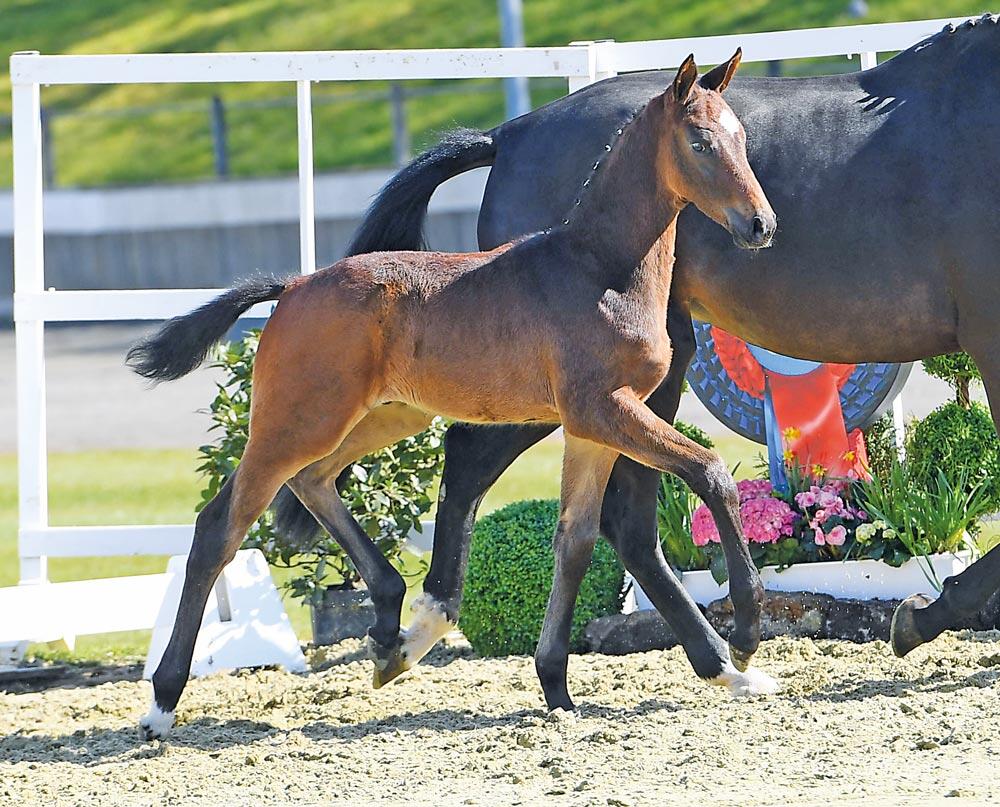 These days, the top sire Cornet Obolensky sets the standard. His offspring dominate show jumping venues all over the world. In the current Summer Mixed Sales collection, there are several outstanding and first class Cornet Obolensky offspring. Come to the Oldenburg Horse Center Vechta on Saturday, June 3rd, and secure your future star.

Another first class foal in the summer collection is Cornet Fuego by Cornet Obolensky - Fuego du Prelet - Landino, Cat. No. 17. His dam Barones is a sister of Vivant, a horse that won international championships for many years and was highly successful under Cassio Rivetti, Katharina Offel as well as Chris Chugg at the international show venues of our day.

Emmanuel by Emerald van’t Ruytershof - Corelnsky G - Landor S, Cat. No. 7, has inherited the valuable Cornet Obolensky genes from his dam’s sire, Corlensky G. The dam Corona was discovered in Vechta. The Tamarona line is also the origin of the international advanced winners Bachelor by Baloubet du Rouet under Fritz Fervers, Le Cou Cou by Landadel with Lars Nieberg in the saddle and Cordial Mèdoc by Coriolan, ridden by Norbert Nuxoll.

The Summer Mixed Sales collection not only offers top foals but also a collection of high quality riding horses. Many of the show jumpers have already won ribbons in youngster sport. Interesting bloodlines and the finest riding points practically guarantee that these talented Oldenburgs will have a successful future in sport.

Cornet Obolensky is found as the dam’s sire in the pedigree of five-year old Love Affaire by Lincolm L - Cornet Obolensky - Lord, Cat. No. 9, in the riding horse collection. Her dam Cremona is also the dam of For Cornet , a licensed stallion who collects ribbons in Grand Prix with Jörg Oppermann. Line 5329 is also the origin of the show jumpers Coeur by Calido I ridden by Rodrigo Pessoa, Torro by Freischärler under Kurt Jarasinski as well as the licensed stallion Catoki‘s Clever by Catoki. This young lady with a triple dose of Ladykiller in her background has the potential to master the most demanding courses.

Take a look at a trailer of the Elite Foals here.

You can also order a printed catalogue from the Auction Office Vechta.

It is also possible to purchase your favorites by phone. Please get in touch with one of the Oldenburg Auction Office employees named below.