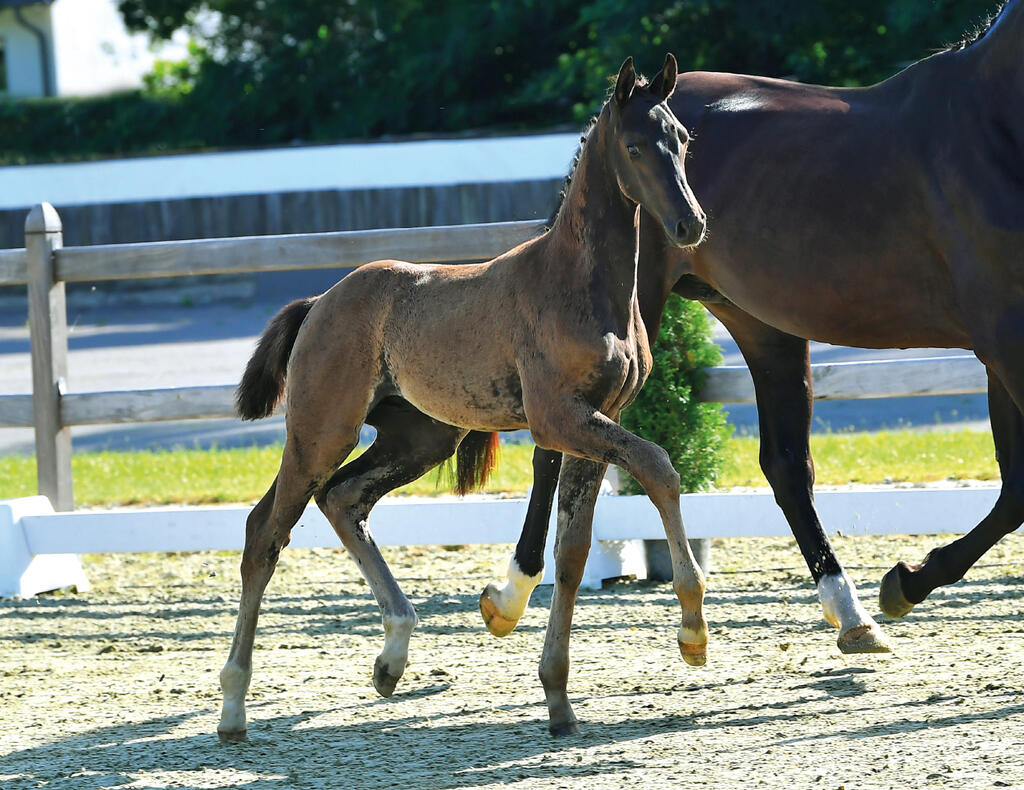 Premiere in Vechta. Oldenburg horse lovers had the chance to bid on their favorite foal of the 22nd Elite Foal Auction as a guest in the auction hall, on the phone and online. The Oldenburg Elite foals are sought after all over the world.

The 22nd Elite Foal Auction at the Oldenburg Horse Centre in Vechta achieved a successful result. Der Hit by Dynamic Dream - Fürst Romancier - Sandro Hit triumphed as the top price. With a knock-down price of 80,000 Euros, the strong moving colt received the top bid. Der Hit changed to a renowned stallion owner in Lower Saxony. The strong type stallion prospect is bred by Marion Menck from Großderschau, Brandenburg. His granddam S-Warthe M is the sister of the licensed Grand Prix star Santa Cruz by Sandro Hit under Heike Hamel. Out of the dam line: The stallion Landgraf I by Ladykiller xx.

Artist Vermeer by Vitalis - Fürstenball - Donnerhall, bred by Dr. Rolf-Peter Schulze, Tiddische, Lower Saxony, advanced to the second most expensive foal of the collection. For 61,000 Euros, the movement artist moved to Oldenburg friends in Great Britain. His dam Fine Lady is sister to the licensed Sandig by Sandro Hit. Granddam Donnerlady is sister to the Grand Prix successful Lord of Loxley by Lord Sinclair I/Hans Peter Minderhoud, NED, and to the licensed Charme by Condor M. From the dam line: The stallions Florenz, Floyd TN, Florentiner and For Austria.

Jumping price highlight from the south: Among the course aspirants, the enchanting Copacabana by Comme il faut - Carrico - Lavallo, bred by Alfred Herbig from Donnersdorf, Bavaria, topped the price statistics. For 32,000 Euros she moved to a top-class stud in Lower Saxony. Sire Comme il faut is one of the most successful stallions in the world under Marcus Ehning. Dam Carrica is sister to the 1.60 m winning Silver Exchange by Landjunge/Ben Maher, GBR, and the licensed Carson M&M by Carrico. Out of the dam line: The 1.60 m-successful Little Pezi/Abdullah Al-Sharbatly, KSA.

Second most expensive foal in the jumping collection was Chicago Blue by Chacco-Blue - Carthago - Landfriese II, bred by Jochen Willen from Löningen, Lower Saxony. The colt changed hands for 26,000 Euros to a show jumping stable in Sweden. Sire Chacco-Blue is the undisputed leader of the ranking of the world's best jumping sires. The Carthago mare Carthella already produced the 1.45 m successful Chathago/Kateryna Klymets, UKR.

"The Oldenburg breeders have again set a new standard with the highest quality level this auction summer. The foals were optimally presented and staged by auctioneer Thorsten Castle and his team", said Managing Director Heiner Kanowski.

Oldenburg friends from all over the world secured their offspring in Vechta: 14 of a total of 57 foals sold at the auction went to Great Britain (5), Hungary (3), Denmark (2), Sweden (2), Luxembourg (1) and Austria (1). A turnover of 1,009,000 Euros was realised at the Oldenburg Elite Foal Auction. The average price settled at around 17,700 Euros.

Directly after the Elite Foal Auction, the Vechta Foal Market will take place tomorrow, Sunday, August 1st, at the Oldenburg Horse Centre in Vechta. Around 100 foals are for sale here.