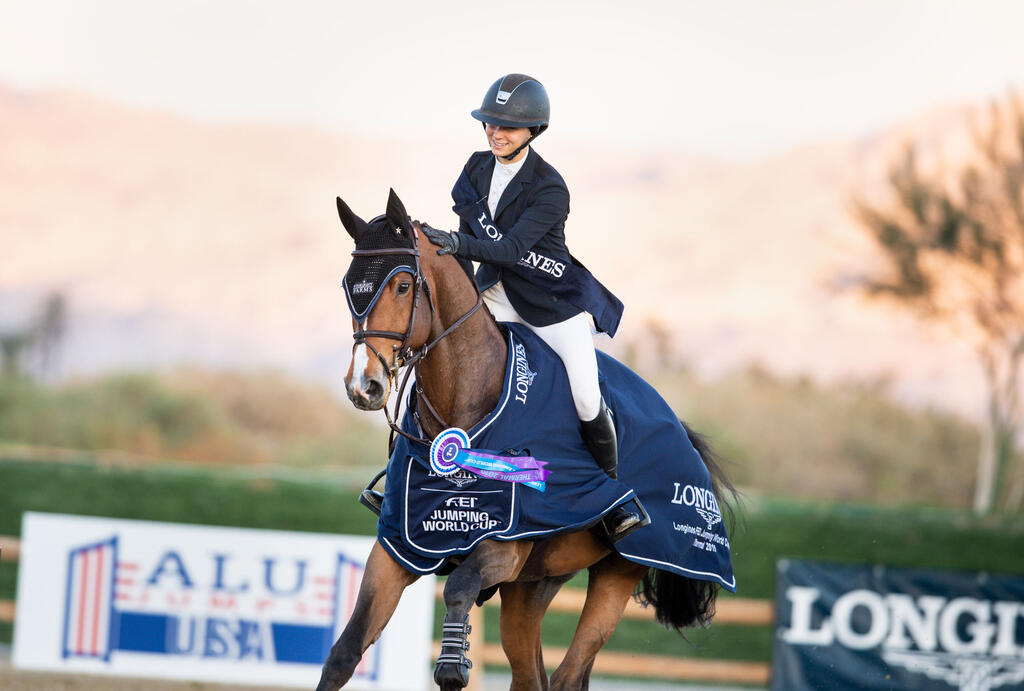 Adrienne Sternlicht is one of America's most talented riders. She was on the winning team at the World Equestrian Games in Tryon and in recent months has graced the winners' podium at numerous competitions. Sternlicht, 27, runs a renowned stable for jumpers in New Jersey and currently trains mainly with Oldenburgs, including one of her absolute top horses, Benny's Legacy, as well as Toulago and Quidam MB.

Adrienne Sternlicht's recent acquisition is Benny's Legacy, born 2008 by Lupicor (by Lux) out of Acordia by Voltaire - Acord II - Pilot, bred by Alfons Brüggehagen, Cloppenburg, and owned by Starlight Farms LLC, USA. The gelding was born in 2008 in the Oldenburg Münsterland. His name has an interesting story attached to it: Benny's Legacy was sold as a foal to the young rider Benedict Kuehnle in Ireland. Shortly afterward, Kuehnle died, and so the handsome bay was named for his former owner. The gelding was slowly introduced to show jumping on the Emerald Isle, with Kuehnle's sister Jessica riding him in competitions. The pair placed in 1.45 m jumping, including at the Grand Prix in Millstreet. At the end of 2016 this talented horse began training with Jenny Rankin. Under the Irish rider Benny's Legacy saw triumphs up to 1.60 m Grand Prix, including at the Nations Cups in Drammen (Norway) and Uggerhalne (Denmark).

Adrienne Sternlicht with her Oldenburg superstars Bennys Legacy (above) and Toulago (below). (Brinkman/Koenig)

This talented bay's career really took off after he was sold to Adrienne Sternlicht in mid-2019. Things clicked immediately for the pair, and their first successes followed quickly: wins in Thermal and Las Vegas, and two World Cup jumping competitions within a span of seven days.

"At shows, Benny is a completely different horse than he is at home in the stable. There he's a quiet, introverted horse. He likes solitude and enjoys quiet surroundings. At shows, however, he gets very extroverted and sociable. He loves attention and shows great interest in the person tending to him. Benny definitely needs a regular partner," says Sternlicht. Sternlicht and the 13-year-old took second place in the World Cup qualifier at the last World Cup show of the season in Wellington.

"Benny has lots of courage and honesty, but he definitely wants a rider to 'hold his hoof'. He has an indescribable character, he's totally sweet and the smartest horse I've ever met. Benny really is aware of everything, so as a rider you always have to be one step ahead to keep him relaxed. His attentiveness reflects his incredible spirit. He doesn't like it when things get hectic and he demands that you handle him with sensitivity and patience," added Sternlicht.

King of the stable

Toulago, OS, born 2005 by Toulon out of Grand Clou by Carthago Z - Narew xx - Ramiro's Son - Grundstein I - Pilot, bred by Gestüt Lewitz, and owned by Starlight Farms LLC, USA, is king at Adrienne Sternlicht's stables. The bay gelding has already proven his capabilities with numerous international top riders, beginning with high marks at the 2010 Bundeschampionat as a five-year-old under Patrick Stühlmeyer and competing in the World Championships for Young Horses in Lanaken under Alois Pollmann-Schweckhorst. In his first World Cup season the gelding came in at a respectable eighth place in the final under Swiss championship rider Pius Schwizer. Toulago and Schwizer competed in the FEI World Equestrian Games in Normandy in 2014. Championship rider Daniel Deusser then took over as Toulago's rider before the gorgeous bay finally went to Adrienne Sternlicht in the USA in 2018. Together the pair has celebrated many wins and places, including taking first at both the Nations Cup in Wellington, Florida and a 1.55 m jumping in New York.

"Of all my horses, Toulago has the strongest character. At home, he's the boss and is treated that way. He can be totally silly, but he can focus well. Toulago gives me incredible self-confidence as a rider. He knows his job and he does it well, so he can get away with practically anything," says Sternlicht.

His dam, Grand Clou, also produced the licensed Quino du Ry by Quidam de Revel. Toulago shares a dam line with Markus Merschformann's Baloupetra by Baloubet du Rouet, internationally successful at the advanced levels as well as her progeny, Tailormade Chaloubet by Chacco-Blue with Sören Pedersen, Carinou by Carinue under Ludger Beerbaum, Comanche by Coupe de Coeur under Meredith Michaels-Beerbaum, and Stone Cold Sober by Sandro Boy under Philip Houston. Another representative of this successful line is Billy King by Baloubet du Rouet, licensed and with international wins under Harrie Wiering and Florian Meyer zu Hartum.

Quidam MB (above and below), born 2005 by Quidam's Rubin out of Honey Moon by Argentinus - Grannus, bred by Veronika Käter, Lastrup, Germany, and owned by Starlight Farms LLC, USA, is the young American rider's school master. (Koenig)

Adrienne Sternlicht's school master is Quidam MB, born 2005 by Quidam's Rubin out of Honey Moon by Argentinus - Grannus, bred by Veronika Käter, Lastrup, and owned by Starlight Farms LLC, USA. Sternlicht celebrated her first international 1.45 m jumping victory with the Oldenburg, as well as second place in 1.50 m in Miami Beach. "It's so nice to see horses from my own stud going on compete at the highest levels," says breeder Veronika Käter, "I'm so proud that Adrienne Sternlicht has had such success and satisfaction with Quidam."

"Quidam has been with me for seven years and he's like family," says Sternlicht. "He's quite sassy, bossy and really operates by his own rules. But I can always rely on him and he fights for me. Quidam is probably my favorite. He's naturally very supple and a great horse to ride. In the arena, he goes beyond himself and shows even more talent. At home he jumps normally but then he's very impressive in warm-ups and on the course."

Quidam MB's career began in 2005 at the Elite Foal Auction in Vechta. "He was an incredibly pretty foal. I used to sell all the horses I bred when they were still young, and that included Quidam", recalls Quidam's breeder Veronika Käter, 59. "For the sire I selected Quidam's Rubin, because I was looking for a stallion who would pass on a large frame and reinforce Honey Moon's qualities."

Quidam MB's dam Honey Moon's other offspring include The Dude by Carry Gold, former auction horse and international Grand Prix winner under William Simpson and Samuel Hutton, and Cold Play by Contendro I, team silver winner at the World Equestrian Games in Tryon with Swedish rider Fredrik Jönsson. She is also dam to the Reserve Champion Mare Honey Star by Balou du Rouet, all three bred by Guido Anneken.

"My whole breeding program is based on this winning maternal line," says Veronika Käter, "and every year I get foals that go back to Quidam's grand dam Harnett by Harnisch/Trak. The foals are all very strong in type and many of them are highly successful in equestrian sport. I take inspiration again and again by the careers of the horses I've bred."