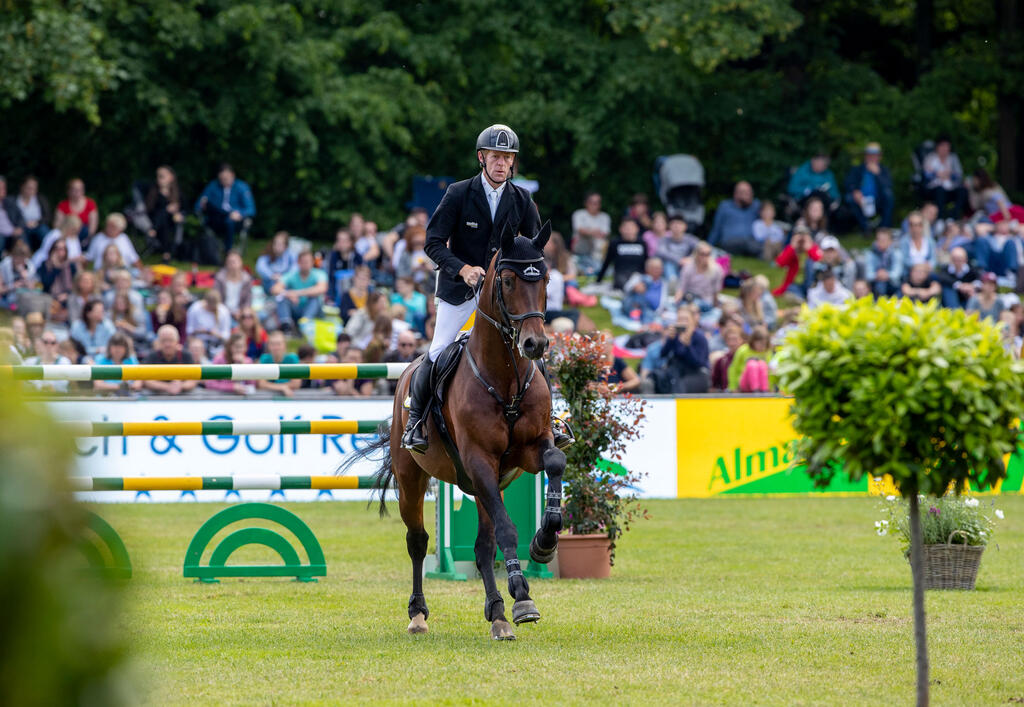 Born in 2011 the Oldenburg stallion Stargold was raised on the lovely Gestüt Sprehe stud farm in Löningen in Lower Saxony, Germany. Three years later the dark bay was licensed.

Stargold's athletic career began as a four-year-old with rider Vanessa Bode, winning several 1.10 m jumping tests. The following year Bode introduced the five-year-old stallion to international competitive sport. In San Giovanni the pair competed in six tests and won them all. "Stargold always had a great attitude and a terrific character, as a stallion as well. We've won practically every jumping test we've entered together. Stargold always bucked before the test as well as afterward, as if he knew when it began and when it was over. He's a very clever horse," says Vanessa Bode – now Meyer – she's married to show jumper Tobias Meyer.

Tobias Meyer helped Stargold move up to the advanced levels in May 2018. That same year the pair won the Youngster Championship for seven-year-old jumping horses in Warendorf. "Stargold is a fantastic stallion with loads of talent and motivation," says Tobias Meyer. "His behavior was always exemplary. Stargold was always very well-behaved and sociable."

In late 2018 Stargold was purchased by the Dutch company Elm Rock BV, which paired the elegant stallion with the champion rider Marcus Ehning. "Stargold is really an interesting horse with a lot of successes. We're going to get to know each other a bit first, and then I will begin to introduce him to bigger challenges," says Ehning. The pair celebrated their debut together in March 2019 at a 1.40 m competition for young jumping horses in Dortmund. In the following months the pair became better acquainted as they competed frequently on the international stage, including in Kronberg (Netherlands), Hamburg (Germany) and Opglabbeek (Belgium) in 1.40 m class jumping tests, as well as taking silver at the Grand Prix in Brussels. At the start of last year Stargold and Marcus Ehning successfully made the leap to top-level sport, taking fourth place at the World Cup in Bordeaux, their first 1.50 m competition. In July of this year they competed in the 1.45 m Grand Prix in St Tropez, taking fifth place, and came in ninth just two weeks later in the 1.60 m Grand Prix.

"I have high hopes for Stargold," says Ehning. "He brings a lot of talent to the sport, and we shall see what the future has in store for us."

Success runs in the family

Stargold's dam, Charme, dazzled at the Elite Mare Show in Rastede in 2008. She is also dam to top auction horse Caroline by Cola Zero, who was bought for a princely sum and transferred to the USA.

Photo (above): Stargold by Stakkato Gold and Marcus Ehning are celebrating great success in parcours. (Lafrentz)