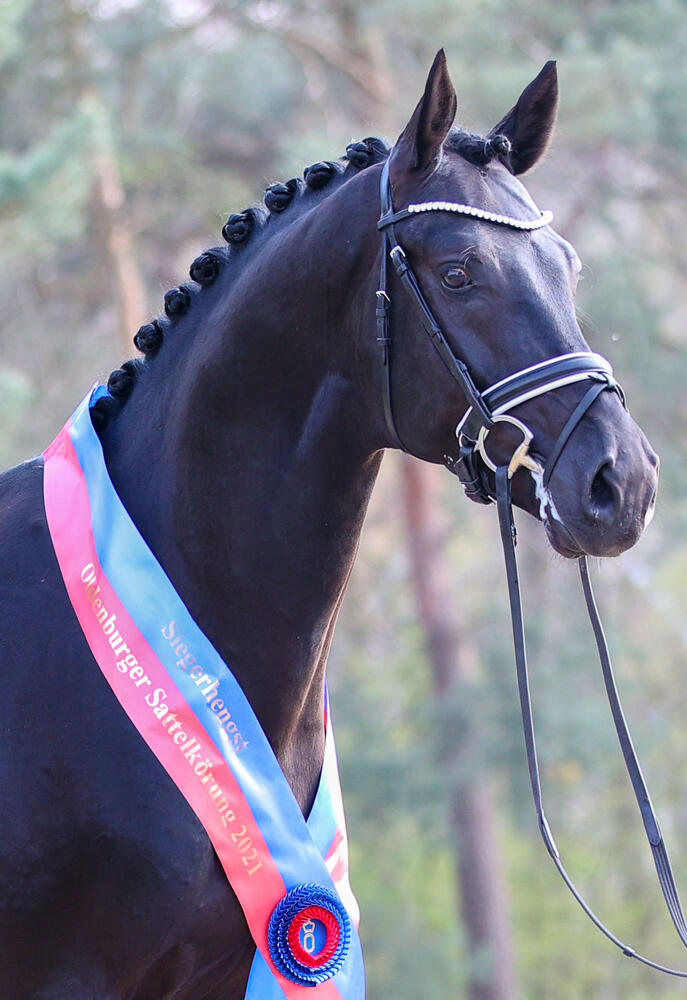 The stunning Champion Stallion of the 10th Oldenburg Saddle Licensing was the strong moving Splendid by San Amour I out of N-Infinity by Dream Boy - Friedensfürst/T., bred by Rob Zandvoort from Belgium, and owned by Rlz Bvba, Belgium.

"A majestic appearance when he enters the ring: black, very swinging and long-legged with a lot of shoulder freedom and good mechanics. We expect a lot from this stallion for the upper dressage sport, who is equipped with the necessary sensitivity and the right attitude," Oldenburg's licensing commissioner Bernhard Thoben described the winner. The test rider Charlott-Maria Schürmann enthused: "The feeling is mega, I have never ridden such a great stallion before". The exceptional talent with his noble bloodlines comes from a successful dressage dam line: Dam N-Infinity was already successful at advanced level at the age of seven. Granddam Fatinitza was a Grand Prix winner under Tatyana Makarova, RUS. Out of the dam line: European Champion Rendezvous under Michael Klimke. The stallion is for sale in the Online Auction.

Today, 19 April, from 9:00 p.m. you have the opportunity to bid for the Champion Stallion as well as some licensed and non-licensed stallions of the Oldenburg Saddle Licensing. The Online Auction ends on Wednesday, 21 April. Trying out of the stallions will take place on Tuesday, 20 April, and on Wednesday. Trying out by appointment only.

The Reserve Champion title went to a son by Foundation out of Gwendolyn by Wynton - Ferro - De Niro, bred by M.C. van’t Hoff from the Netherlands, and exhibited by Gestüt Bonhomme from Berlin. Dam Gwendolyn is the sister of the licensed stallion Le Formidable by Bordeuax. His second dam Vienna is the sister of the star sire Bretton Woods by Johnson under Matthias Alexander Rath.

The Ic-premium was awarded to a stallion by Frascino out of Fahra-Diva by Lauries Crusador xx - Dormello - Placido, bred by Frank & Christine Lange, Porta Westfalica, and exhibited by Peter Aringer from Herford. His third dam Farena is the sister of the World Cup winner Delaunay OLD by Dr. Doolittle under the Swedish rider Patrik Kittel. A highlight of this performance was a very ground covering, tactful walk. The stallion is for sale.

All in all, the licensing committee of the Verband der Züchter des Oldenburger Pferdes licensed nine out of 14 stallions. Here you will find the results.

Please click here to go directly to the auction lot.