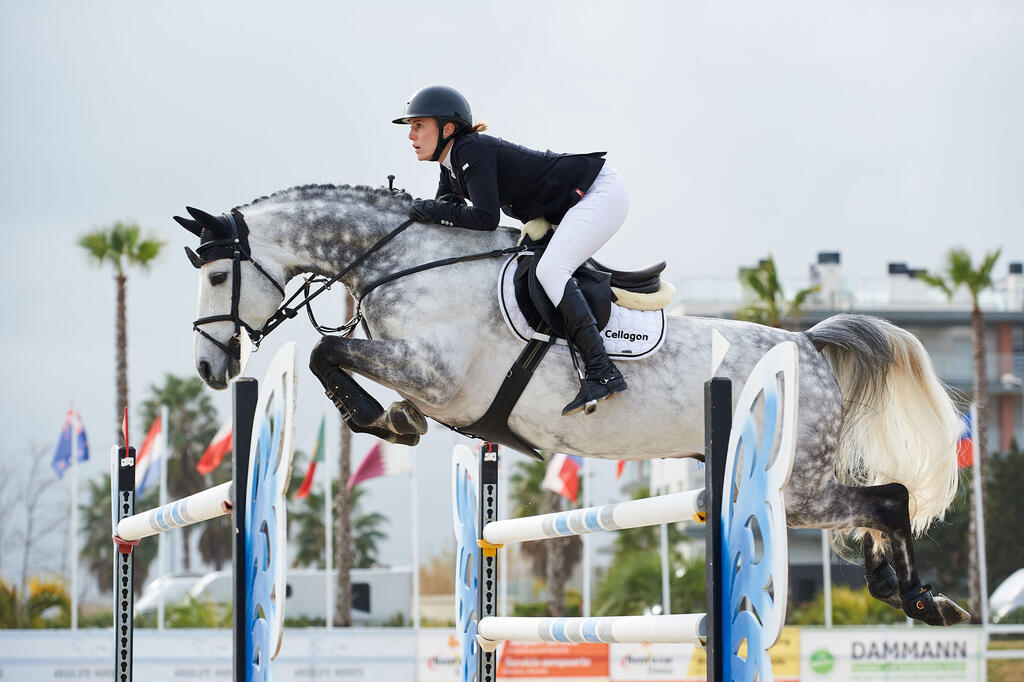 Janne-Friederike Meyer-Zimmermann and Lima, OS, born 2011 by Lucky Boy out of Blankonette III by Lefevre - Inschallah AA - Zeus - Furioso II - Condor, bred by ZG Sandkamp, Gronau, and owned by Jürgen Fitschen, Schneverdingen kicked off their 2020 season in Germany with a fantastic third place at the VR Classics in Neumünster. The pair started competing together again in late 2019. At the Festhalle in Frankfurt they won the silver medal straightaway in 1.40 jumping test. The two heroes also competed earlier this year at the Mediterranean Equestrian Tour in Oliva, Spain, securing first places in 1.45 m jumping tests.

Lima was born in 2011 at the stables of Heinz and Werner Sandkamp in Gronau. The gray stallion started his career at the 2011 Elite Foal Auction at the Oldenburger Pferde Zentrum Vechta, where he went to a Russian buyer. In 2017 and 2018 Lima was gently introduced to 1.35 m young horse tests by Philipp Battermann and Jens Wawrauschek. The stallion was then transferred to the stables of Kristin Kirchner, who rode him to victories in 1.30 m jumping tests. In early March 2019 Lima was given a new rider, Janne-Friederike Meyer-Zimmermann, and the two cleared numerous rounds at 1.35 m in Oliva. Mylen Kruse, rider at the Meyer-Zimmermann stables, was Lima’s interim trainer through 2019 before Janne-Friederike Meyer-Zimmermann once again took up the reins in early December. The pair then commenced competition at the advanced level, taking first place in 1.45 m jumping in Oliva and winning the bronze at the VR Classics in Neumünster in 1.45 m jumping. Janne-Friederike Meyer-Zimmermann describes Lima as “the best-looking dapple gray far and wide, and he jumps like a rocket!”

Success runs in the family
Lima is a descendant of the renowned Blankenese line. His granddam Blankonette by Inschallah AA is also dam to the licensed Conners by Corlando, who placed high at advanced levels under Niels Nanning and Hans-Dieter Blumhoff. Full sister Corlanda likewise saw advanced level triumphs before moving to the breeding stables of Werner Sandkamp, where she gave the world the internationally successful jumpers Bugsbunny by Granulit and S.I.E.C. Coco Landa by Corat.

Lima’s half-sister Banda de Hus by Argentinus was highly successful in top international sport under Kevin Staut (FRA) and Gregory Wathelet (BEL), with 1.60 m victories in Helsinki, Lummen and Oslo. Another successful Lima brother is Cool Down by Catoki. The bay has taken numerous top places at the S***** level under Ludger Beerbaum in Stuttgart, Berlin and Cascais (Portugal). His dam Blankonette III is also dam to Banda III by Zirocco Blue, who in 2015 advanced to Ic Premium Mare at the Elite Broodmare Show in Rastede. “I always have two or three mares from the Blankenese line in my breeding program. We find them to be very athletic, motivated and refined horses”, says breeder Werner Sandkamp.

Photos below from left: Lima’s siblings: Cool Down by Catoki under Ludger Beerbaum and Banda de Hus by Argentinus under Kevin Staut. (Holcbecher, Frieler)