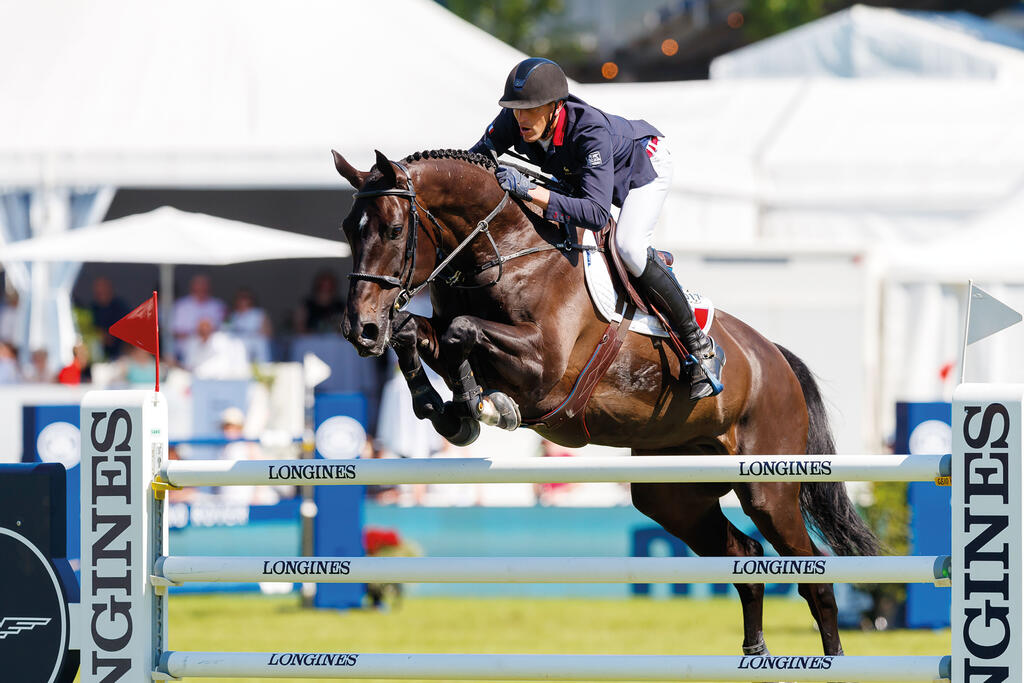 Calevo, born 2009, by Casall out of Farnique by Levantos I - Rubinstein I, bred by Reimer Detlef Hennings, Bendorf, owned by Dariusz Slupczynski, Poland, is sweeping up victories at the Global Champions Tour, Grand Prix and Nations Cups under the French rider Kevin Staut. Last yeat at the European Championships in Rotterdam the pair delivered an impressive faultless round on the final day.

Calevo was born in 2009 at the Hennings family stables in Bender, near Rendsburg in the German state of Schleswig-Holstein. Even at an early age, the bay’s temperament, attitude and character wowed his breeders. Calevo was produced by the Hennings family and always enjoyed special status there, as his sire Casall was also produced by the Hennings family and likewise showed much promise at an early age. Reimer Detlef Hennings was a successful advanced-level show jumping rider; today he manages his parents’ breeding and training stable together with his wife and daughter, Alessa Hennings, who celebrated her first advanced-level victory with Calevo’s dam, Farnique. This paved the way for Calevo and his jumping talents.

Calevo was educated by Alessa Hennings and successfully presented as a five-year-old in 1.10 m show jumping tests. “He always had a great feel for the course and was enormously careful”, his breeder Reimer Detlef Hennings recalls. Calevo changed ownership in 2014 and moved to his new stable in Poland, where Grzegorz Psiuk first presented the gelding in international young horse tests and later in 1.40 m jumping tests.

International breakthrough
Calevo later transferred to the stables of Jaroslaw Skrzyczynski, who had already celebrated wins in 1.60 m show jumping with the gelding. After a short interval at the stables of the Swedish rider Rolf-Göran Bengtsson, Calevo came to Kevin Staut in France. This pair is now quite successful together and could be seen, among other places, on the winners’ podium for 1.60 m jumping in Paris. “Calevo has been with me for five months”, said Kevin Staut after their triumph. “We’re making great progress and I have great hopes for the future. I am very happy to be standing on the podium today at a 1.60 m Grand Prix. Naturally it’s something very special to be riding in this stadium, in Paris, in my own country.” The pair likewise celebrated their victory in the Nations Cup in St. Gallen, Switzerland as part of the French team. Calevo was also on the successful French Nations Cup team at the CHIO Aachen 2019, and his faultless performance in the second round contributed significantly to the French team’s winning the bronze medal.

Only the best for Calvin
“Calevo is a very good horse, he always keeps his stall very clean, which makes our work easier”, says Ludovic Escure, Calevo’s groom. “There isn’t anything that he really hates, but he loves to be scratched. Usually he can scratch himself, but he’s happy when we do it for him”, he adds with a laugh.

In the stall, this elegant bay goes by the name Calvin. His groom described a typical day for Calevo: “Calevo normally starts the early morning with a lot of hay and his concentrate feed. After breakfast, Kevin rides him. He often goes to the beach or on a hack, or trains in the manège. In the late morning he’s in the paddock. In the afternoon he goes for a walk and does some grazing. Calvin doesn’t like being alone. At competitions he always gets a double box, otherwise he won’t lie down to sleep”, Escure says about this gentle giant, who measures 1.81 m.

Athletic Oldenburg dam
Calevo’s dam Farnique competed successfully at advanced levels under the name La Pineda. In 1999 she shone in the Brillantring in Rastede. At age six the Oldenburg mare competed successfully in the Bundeschampionat with Florian Meyer zu Hartum. The pair placed second in the qualifiers twice and eighth in the final. After these successes Alessa Hennings took over the reins, and the mare led her new rider to her first advanced-level victory. Farnique later gave up her sports career to become a brood mare and was dam of four offspring, including Calevo. The dam line has given the equestrian world the advanced level show jumpers Alissa by Goldpilz under Rosen Schmitz and Interpol by Inschallah AA under Ilona Baumann.