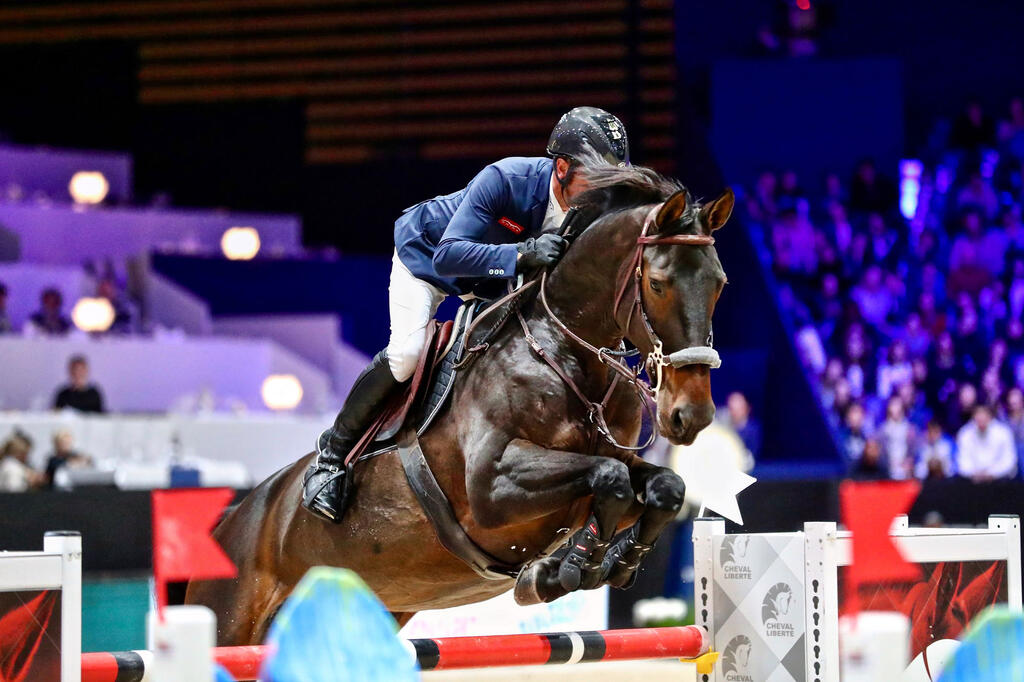 Oldenburg Inside: In the Fast Lane

Queeletta's career started in Vechta at the Special Auction in 2013. This Oldenburg mare is now a star in World Cup and Grand Prix show jumping under French rider Julien Epaillard.

Queeletta's dam Gran Lancarina thrilled spectators at the Elite Mare Show in Rastede in 2004, and was awarded the Ic Premium. (Beelitz)

Queeletta, born 2008, by Quality out of Gran Lancarina by Landor S - Cheenook - Akzent II, bred by Claus Cornelius, Schwanewede, and owned by S.C.E.A. Haras de Reux, France, and Epaillard registered numerous show jumping wins and successes in recent weeks and months. The pair recently turned heads with their victory at the Grand Prix in Bordeaux, France.

Queeletta was born in 2008 and reared at the stud farm of Oldenburg breeder Claus Cornelius in Schwanewede under the name Gran Aira. The bay mare completed her performance test in Vechta as a five-year-old, and was awarded a 9.5 for free jumping. Shortly afterward, Queeletta was sold at the Summer Mixed Sales to a buyer in Sweden, where she started her international carrier under Swedish rider Nicole Holmén, first in young horse tests and later in 1.35 m tests.

Queeletta was then sold to France as a seven-year-old and began to reap successes there with French rider Alexandre de Rothschild. The pair placed in tests in 1.50 m jumping. Queeletta was transferred to the stables of Julien Epaillard in mid 2019, and the two began to amass numerous victories in international sport: after just four weeks of training together, the pair triumphed with a second place in 1.50 m jumping in Paris. After that, their rise was rapid. Epaillard and Queeletta placed high twice in the jump-off at the Global Champions Tour in Rome and took second place in the final of the Global Champions League Playoffs in Prague.

Their greatest success to date, however, came right at the beginning of 2020 when they won silver at the World Cup in Basel. Just a few weeks later, Queeletta and Epaillard stood at the top of the podium at the CSI***** Grand Prix in Bordeaux, where the pair was unbeatable in the 1.60 m class. "Winning second place at the Jumping World Cup in Basel was fantastic. Queeletta really gave her all and it brought us one step closer to our goal, the World Cup Finals in Las Vegas. Unfortunately, that was canceled because of the coronavirus pandemic," says Epaillard. "Queeletta is quite intelligent and unbelievably careful. She's thinking right along with you on the course, and that makes things easier for me."

A family of champions

"I'm very proud of all the horses from my stud," says breeder Claus Cornelius. "It takes a lot of time and patience until an internationally successful horse like Queeletta comes along." Queeletta's dam Gran Lancarina thrilled spectators at the Elite Mare Show in Rastede in 2004, and was awarded the Ic Premium. The jury awarded her a 10 in free jumping in her mare performance test. "As a breeder, I've quite proud that Queeletta's dam, Gran Lancarina, did so well at the 2004 mare show in Rastede and won the Ic Premium. I could have sold her for a lot of money back then, but I wanted to breed her myself," says Cornelius. Gran Lancarina first turned heads as a sport horse. This Landor S daughter placed in M-level show jumping tests with Lennert Hauschild. In her later career as broodmare, Gran Lancarina produced many valuable offspring for the Oldenburg breeding world: Baron du Ley by Bordeaux is a successful dressage horse under Hanna Hinrichs. Quilina by Quality, a full sister to Queeletta, enhanced the 2006 Elite Foal Auction collection as well as the Fall Elite Auction collection four years later.

Grand dam Gran Carina was also bred by Claus Cornelius. Gran Carina produced Gran Volta by Ampere for the 2011 Fall Elite Auction, Qualitycoon by Quality for the 2012 Special Auction, and Lawrence von Arabien by Landor S for the 2003 Spring Elite Auction in Vechta. Lawrence von Arabien enjoyed international success with Italian rider Mario Giusti. Gran Carina is also dam to Cornelensky by Corlensky G, now at home in the USA and who is now enjoying success in the young riders circuit under Clea Caddell. "Back then I was able to acquire Gran Air as a young mare," recalls Claus Cornelius. "Her first foal was Gran Carina by Cheenok. I bred many wonderful and successful offspring from that mare."