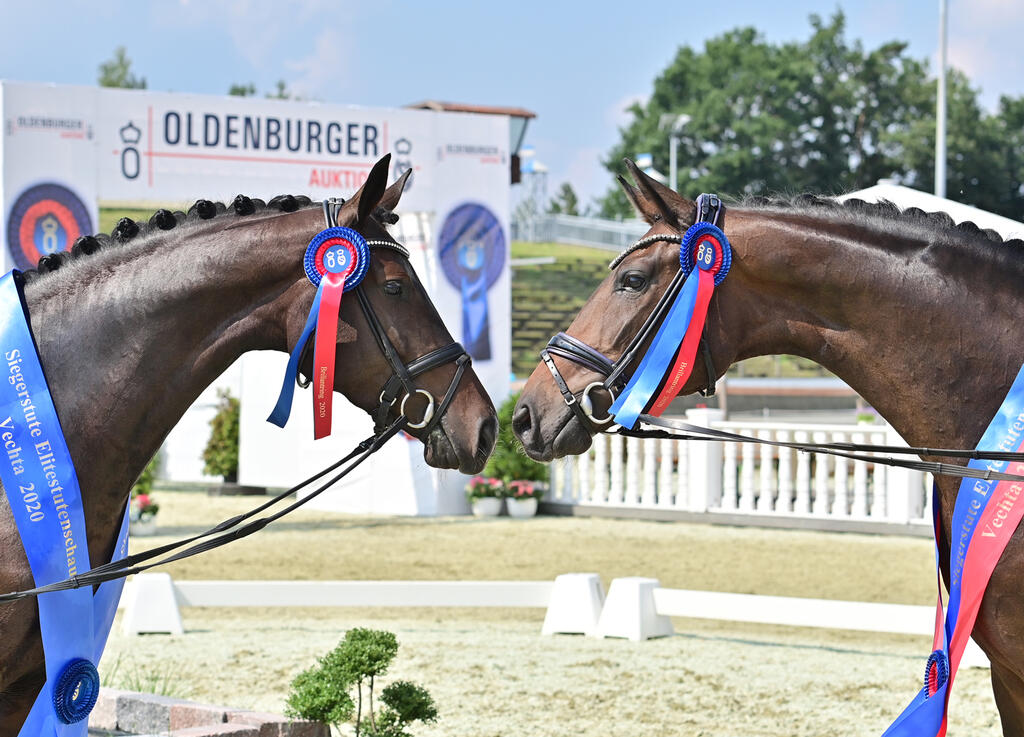 This year, the Oldenburg Elite Broodmare Show was thrilling for the first time in the Reiterwaldstadion of the Oldenburg Horse Center Vechta. Numerous Oldenburg Champion Mares have already made the leap into the international top sport. Also this year Oldenburgs best mares impressed with a bombastic presence in habit and movement brilliance.

With the title of the Reserve Champion Mare awarded was Ronja Räubertochter, born 2017, by Bon Coeur out of Räubertochter by Romanov Blue Hors - Farewell I, bred and owned by Friedrich Kuhlmann, Neuenkirchen/Lower Saxony. Sire Bon Coeur was a premium stallion at his licensing and is internationally victorious up to Intermediaire I under Swedish Caroline Darcourt. Bon Coeur also produced the OL Champion stallion Bellany from last year. All three sires in the falling pedigree were successful in advanced level on the dressage arena.

With the Ic premium awarded was HP Summer Breeze, born 2017, by For Romance II out of Summertime by Fürstenball - Friedensfürst/Trak., bred and owned by HP horses Aps from Denmark. Sire and premium stallion For Romance II was licensed in Vechta in 2015. None other than Lone Bøegh Henriksen is the breeder and owner of this beautiful movement queen.

The title of the Champion Mare at the Springpferdezuchtverband Oldenburg-International (OS) went to Only you, OS, born 2017, by Ogano out of Sunshine’s Botox by Balou du Rouet - Lord Liberty, bred by Katja Schwierking from Barver/Lower Saxony and owned by Katja & Arndt Schwierking from Barver. Dam Sunshine’s Botox already brought the 1.40 m successful auction horse El Balou OLD by Eldorado van de Zeshoek/Lillie Keenan, USA, as well as three other top international show jumpers. For the current Elite Foal Auction on August 29th, El Balou Junior by Eldorado van de Zeshoek a brother of the celebrated Champion Mare Only you fascinates. Have a look directly at the Elite Foal collection and secure your champion.

As the Reserve Champion Mare shone Jurwina's Girl, OS, born 2017, by Cornet Obolensky out of Juwina v. Diarado - Couleur-Rubin, bred and owned by Peter Wendeln from Garrel/Lower Saxony. Her dam Jurwina already shone as the 2013 Champion Mare in the Schlosspark of Rastede. Granddam Jana brought the internationally successful Strombuli by Stalypso as well as Doriano. The second success of the Wendeln family from Garrel.

Here you can find the results of the Brillantringe:

Photo: Champion Mares Only you by Ogano und Casey by Sir Donnerhall I. (gr. Feldhaus)