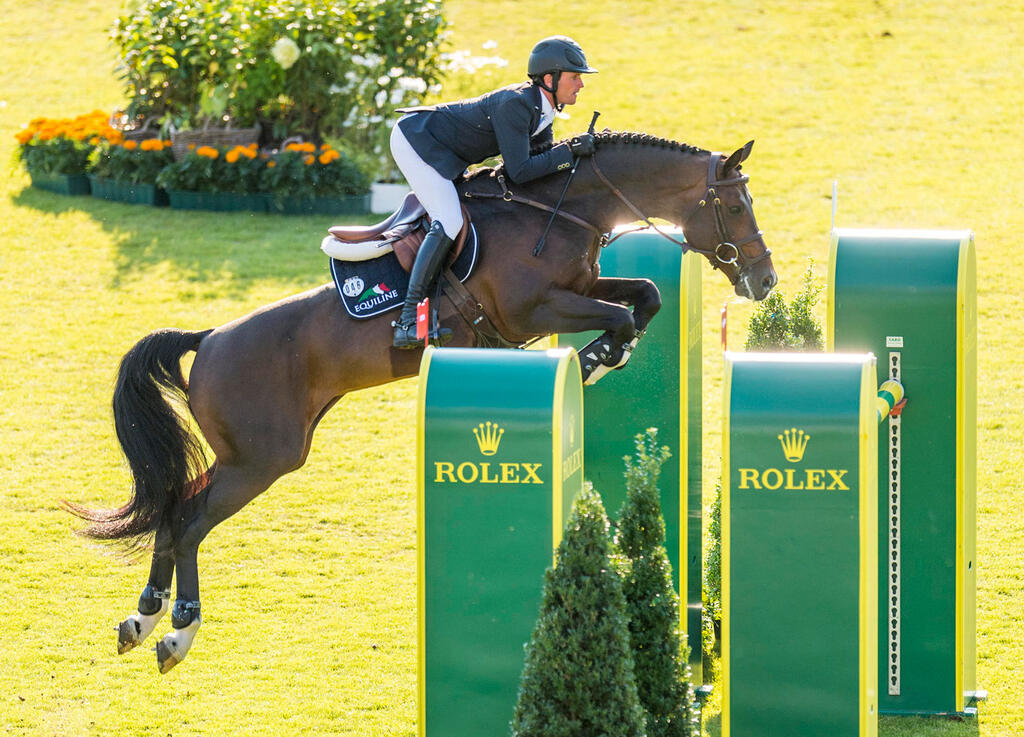 One victory after another
The current Number One in his stable is none other than the brother of the Oldenburg star sire Balou du Rouet by Baloubet du Rouet: Balou du Reventon, OS, born 2006, by Cornet Obolensky out of Georgia by Continue - Domino - Gepard, bred by Gestüt Lewitz, and owned by: Ann Thompson, USA. The pair delivered a fantastic round at the FEI Nations Cup finale in Barcelona towards qualification for the Olympic Games in Tokyo. The stallion was approved as Cornet’s Balou, 5-year-old national champion under Patrick Stühlmeyer in 2011. His dam Georgia also produced two offspring with victories at the advanced levels: Chatinue by Chacco-Blue with Luis Alejandro Plascencia O., Mexico, and the Oldenburg Auction horse Billy Balou by Baloubet du Rouet with Hannes Tremp. Georgia also gave the Vechta Auction seven-year-old Cassilou by Caressini L, who won in Spain at 1.30 m under Rosendo Bidart Alurralde, Argentinia. Balou du Reventon and Darragh Kenny’s wins include the Knokke Grand Prix in Belgium and the CSI***** Grand Prix in Chantilly, France. This dream team also helped the Irish National Team triumph at the Nations Cup and recently represented the Emerald Isle at the European Championship in Rotterdam. Their most recent victory was at the Nations Cup finale in Barcelona. But the Cornet Obolensky son is not just a sporting success. Under the breeding name Cornet’s Balou, the stallion is wowing the breeding world with expressive and talented progeny. The stallion is making a name for himself through his numerous offspring in sport. Seven-year-old Libella by Cornets’s Balou - Lord Pezi placed 2018 at the Hamburg Derby under Fernando Piaz. Cornet’s Cambridge by Cornet’s Balou - Cambridge is triumphing at the highest levels under Markus Merschformann.

From Lower Saxony to the world’s greatest arenas
There’s another representative of that proven Oldenburg Balou du Rouet blood in Kenny’s stable: Babalou, born 2005, by Balou du Rouet out of Aetna by Silvio I - Figaro, bred by Heino Lüschen, Wardenburg, and owned by Jack Snyder, USA, is claiming victories together with the Irish rider Darragh Kenny. The pair placed fourth at the Aachen Grand Prix in 2018. “This mare has been represented quite well in recent shows. I often hear from breeder colleagues that Babalou was excellently represented in some big jumping competition, and that makes me very proud,” says Babalou's breeder Heino Lüschen from Wardenburg. The pair was in top form before the FEI World Equestrian Games in Tryon and qualified for the championship. But that dream was not to be when their travel to Tryon had to be canceled at the last minute: the mare showed signs of colic and required surgery. But she was back in riding shape just a few months later, returning to top sport in early 2019. The pair has managed to build seamlessly on their successes, placing in the Grand Prix of Aachen this year and finishing the CHIO Aachen with a sensational fifth place in the Rolex Grand Prix. Just recently they secured second place in 1.50 m at Tryon. Babalou comes from the Oldenburg Arosa dam line, the progeny from which include the 2014 OS champion stallion Coupe Gold by Coupe d’Or and the sire San Amour I by Sandro Hit. “The choice of Balou du Rouet was by chance and a gut decision at the time, but his success confirms that it was the right decision,” says Heino Lüschen.

From an international stud
International describes the third show jumper in the bunch like no other. Bred by Leslie Carter, this contender thrilled Darragh Kenny from the very first minute. We’re talking about Cassini Z, born 2007, by Cassini II out of Capers by Capone - Consul, bred by Leslie Carter, USA, and owned by Ann Thompson & Everlong Llc, USA. The bay gelding was born at Leslie Carter’s stables in the USA and originally named Chapel Hill. We asked the successful breeder what makes this gelding so special. “He was a really sassy foal; he liked to jump out of his paddock to visit the neighbor horses. He could be a real nuisance. I’m very happy that Darragh Kenny’s had such success with him and that he’s jumping to his heart’s content,” says Leslie Carter, grinning.

Cassini Z was transferred to Mac and Bowers Cone as a five-year-old. The Cone family trained the bay to advanced levels and presented him successfully in 1.50 m competitions. “Cassini has always been a very obedient horse, he’s actually more like a dog. Leslie Carter gave him a wonderful basic training as a young horse and he’s really a high-quality gelding. He’d jump anything you put in front of him,” recalls Bowers Cone.

It was early 2016 that Darragh Kenny first had the pleasure of presenting this high-flying Oldenburg at the CSI***** competition in Wellington. That year, Cassini Z was transferred to Kenny’s stable, actually to be sold on. But then Kenny decided otherwise. “I was so convinced by this horse that I got my sponsor to invest in him” says Darragh Kenny. Ann Thompson heeded the Irishman’s advice, and just a week later, Cassini Z proved that keeping him was the right thing to do. The pair started off with a CSI*** Grand Prix victory in Wellington, meanwhile reaping countless wins at the world’s most challenging competitions. Cassini Z and Kenny won the 1.50 m in Ocala and Dublin, and the 1.55 m in both Madrid and the London Olympia Horse Show. They also won bronze in 1.60 m at the Grand Prix in Miami. Along with many other successes, the pair placed seventh last year in 1.60 m at the New York Grand Prix and triumphed in 1.45 m at Spruce Meadows. "It thrills me tremendously to see my ‘Chappie’ so successful in top sport," says breeder Leslie Carter, who hopes for continued success for Darragh Kenny and her Cassini Z.

Photo below I: Cassini Z and Darragh Kenny sought and found each other. Just a few weeks later, this dream team was celebrating Grand Prix wins in the USA. They’ve also been taking numerous victory laps at top show jumping competitions. (König)

Photo below II: Babalou is conquering the world’s most difficult courses together with Darragh Kenny.Her sister Balou du Silva is a champion in 1.30 m jumping under Miguel Angel Vottero Issa. (Frieler) 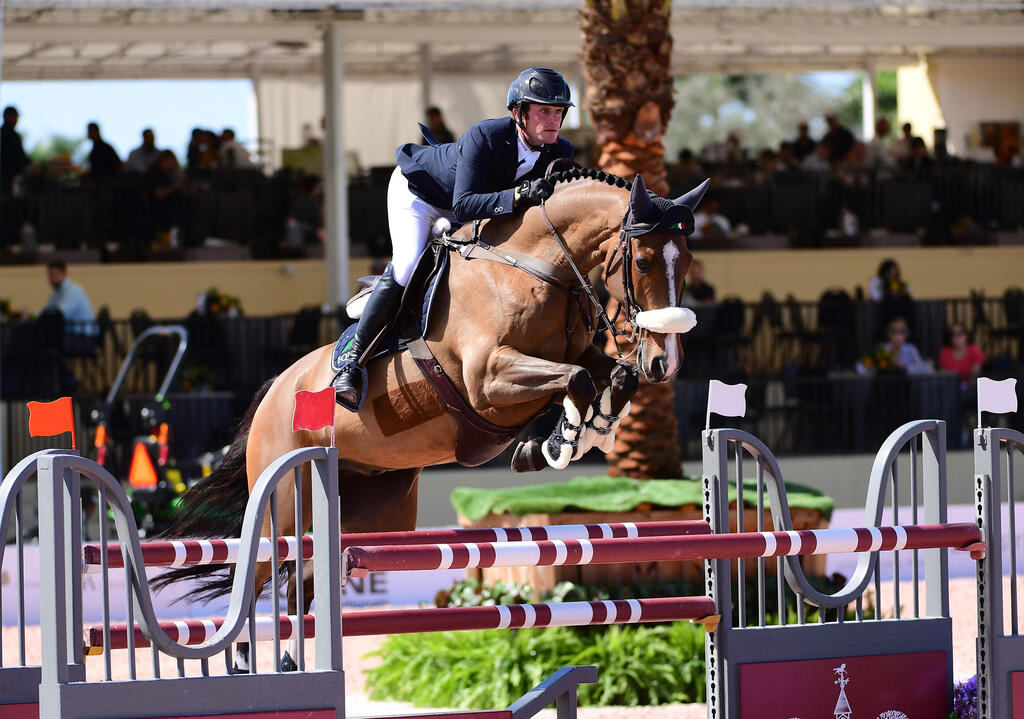 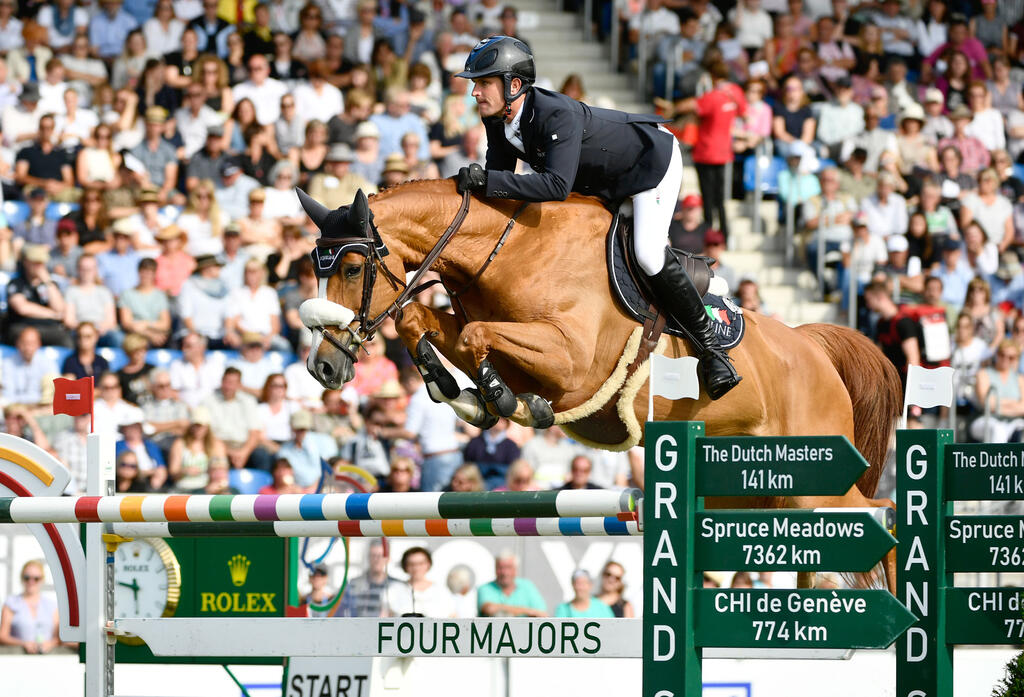