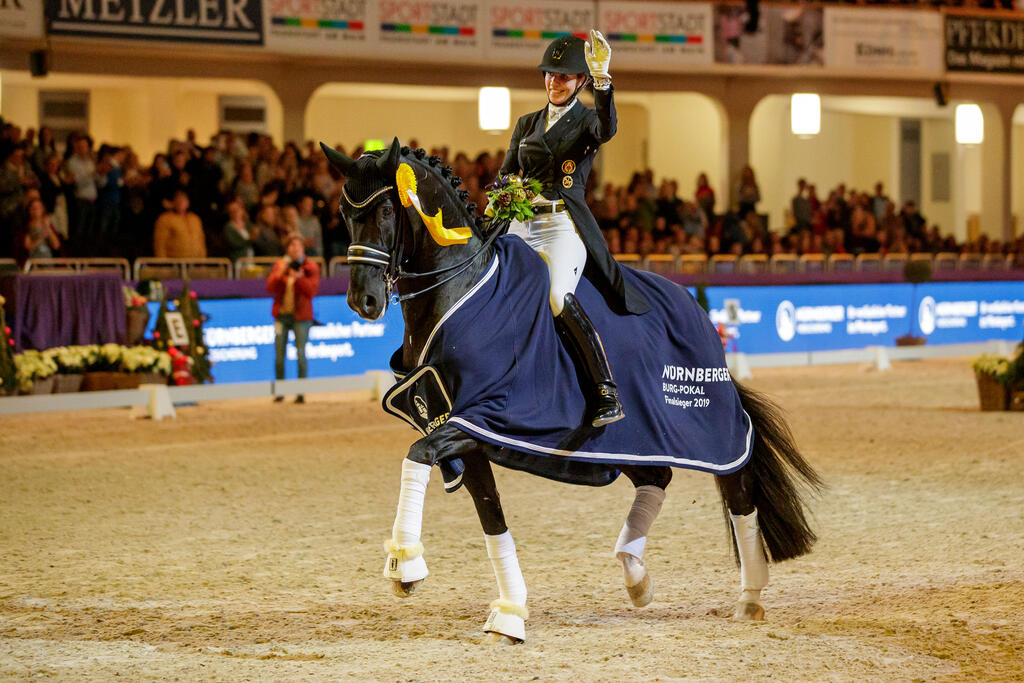 Oldenburg Inside: “A heart of gold”

Total Hope OLD and Isabel Freese danced their way to victory in the finals of the Nuremberg Burg-Pokal. A few months before, the pair turned heads by taking home bronze at the World Championships in Ermelo.

Total Hope OLD and Isabel Freese have gotten a lot of attention in recent months. A glorious win in Redefin in May secured their qualification for the Nuremberg Burg-Pokal finals in Frankfurt. This Weihegold OLD son furthermore presented his best side for the qualifications for the World Championship for Young Dressage Horses and could compete under the Oldenburg colors in Ermelo, just as he had done the year before. The pair took bronze both in the qualifier as well as in the finale among the seven-year-olds. “An enormous uphill tendency, fantastic rhythm and a solid gait,” was how the judges described his canter, awarding it with a perfect score of ten. “It’s a dream come true” said Total Hope OLD’s owner Lone Boegh-Henriksen of Denmark after the pair’s bronze medal victory at the World Championship for Young Dressage Horses in Ermelo.

Success from a young age
This star performer was born at the stables of Christine Arns-Krogmann in Lohne, not far from the Oldenburg Horse Center Vechta. “I was caught up in all the hype surrounding Totilas, naturally. I was certain that Weihegold and Totilas would be a fantastic match. And Total Hope’s successes have confirmed my hunch,” recalls Christine Arns-Krogmann. This pitch-black stallion came to Paul Schockemöhle as a weanling and started his career with a bang. At his licensing in Flyinge, Sweden, Total Hope OLD wowed the judges and was ultimately named champion stallion. He was much in demand during his first breeding season in Sweden and triumphed the following year at his performance test. The stallion won the breeders trophy for five-year-old dressage horses in 2017. As a six-year-old Total Hope OLD then qualified for the World Championship for Young Dressage Horses, representing the Oldenburg colors in Ermelo under Swedish rider Pernilla André Hokfelt. The pair triumphed in the “small finale” and placed in the finals.

In 2018 the stallion returned to Paul Schockemöhle in Germany for breeding. Shortly afterward, the Oldenburg breeder Lone Boegh-Henriksen of Denmark secured half ownership of the stallion. “I’d bought Fürstin Weihe by Fürst Romancier from the first crop. I was always a big Weihegold fan. The first two offspring from this mare had me convinced. Damon Gold OLD by Damon Hill was reserve champion at the 2017 saddle licensing in Vechta; in her first crop of foals in 2016, his full sister Damiana by Damon Hill produced HP Grace by Gray Flanell, who in 2019 graced the Brillantring in Rastede as Ic-premium mare. With Total Hope I was able to obtain more Weihegold blood,” says Lone Boegh-Henriksen. She’s optimistic of the future. “Total Hope may not be the greatest, but he has a heart of gold and unbelievable willpower. We’re a perfect team: Paul, Isabel, his groom Christin and me, with Total Hope in the center. He’ll be making his way to the advanced classes.” His groom Christin Geske agrees. “Total Hope’s a real stallion. But he can also be very affectionate. He’s so happy when you come into his stall. Alongside his training he goes on the treadmill or out to pasture. Mostly he likes to knock his ball around the hall,” she says with a grin.

Like mother, like son
Total Hope’s dam is no less than Weihegold OLD by Don Schufro (breeder: Inge Bastian, Bargteheide). She was proving her worth at an early age, starting with her win at the Elite Mare Show in Rastede. Under Beatrice Buchwald she won both the Nuremberg Burg-Pokal finale and the Louisdor Prize in Frankfurt. In 2016 Weihegold OLD piaffed her way to a silver medal under Isabell Werth and helped take team gold at the Olympic Games in Rio de Janeiro, Brazil. The following year, the pair won three World Cup finals in a row. Weihegold OLD proved her breeding credentials not only with Total Hope OLD, but also with the Brillantring mares Fürstin Weihe by Fürst Romancier, Weihcera by Zack, Weihe Glück by Totilas and Weihcine by Fürst Heinrich. “We sell all the stallions as foals, and only keep certain select mares. To see Total Hope at a championship like this makes me proud. His qualifying for the Nuremberg Burg-Pokal finale is also huge and I’m looking forward to see him dance there,” says his breeder, Christine Arns-Krogmann. And that’s just what he’s doing – the noble black stallion handily won the finale in Frankfurt. Total Hope OLD’s dam is from the famous Weissena dam line, which produced such greats as the approved stallions Lux Dressage Statesman OLD by Stedinger, Inselfürst by Inschallah AA, Canaster I and II by Caprimond/T., and Triumphator and Top of Class by Titus.

Photo: Total Hope OLD and Isabel Freese danced to victory at the final of the Nuremberg Burg-Pokal. (Lafrentz)