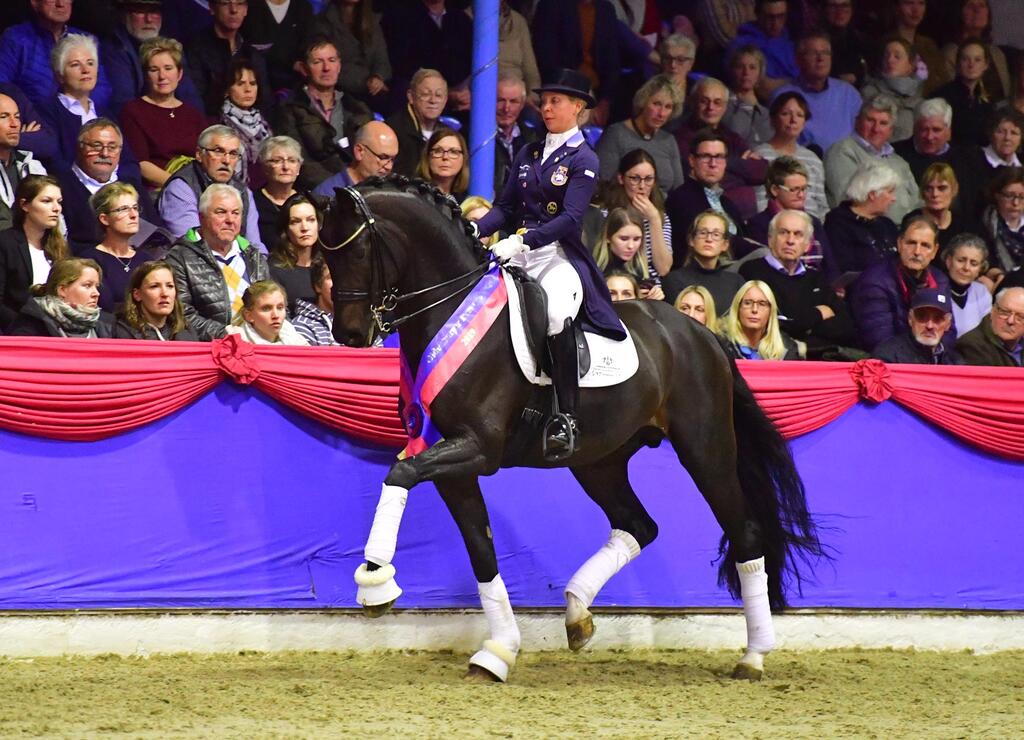 VTV Stallions of the Year

Once again this year, upholding a long tradition, a VTV jumper stallion and a VTV dressage stallion were crowned during the Oldenburg Licensing. This highly prestigious award is given to a licensed, Oldenburg stallion for his outstanding achievements in sport and breeding. On the occasion of the Stallion Gala, the two athletes For Romance I OLD and Chap II were decorated with the VTV sash in the Oldenburg Horse Center Vechta.

Heiko Meinen, head of the R+V VTV General Agency, which is specialized in insuring animals, once again took the opportunity this year to reward the breeders, as well as the owners by handing each of them a generous check in the amount of 1.000 Euro for their great achievements in breeding.

VTV Dressage Stallion
The splendid career of For Romance I OLD, born in 2009 by Fürst Romancier out of Gesina by Sir Donnerhall I - Don Schufro - Sandro - Gepard, bred by Gestüt Lewitz, and owned by Dressurpferde Leistungszentrum Lodbergen GmbH, was launched in 2011 when the Dressurpferde Leistungszentrum Lodbergen acquired the celebrated champion stallion of Oldenburg licensing on the Oldenburg stallion market. Carefully schooled by former auction rider Kira Wulferding and successful in dressage horse tests in classes A through M, this gorgeous stallion celebrated his first triumph in 2016 in advanced classes as well as a place in the top ten at the Nürnberger Burg-Pokal finals in the same year. In late 2017, For Romance I OLD’s further athletic development was taken over by Dressurpferde Leistungszentrum Lodbergen’s head trainer, Therese Nilshagen. This year the pair won silver in both the Intermediaire II tests and the Short Grand Prix. “Romance possesses extremely good rideability and collection. Working together with our trainer Klaus Balkenhol, we now want to concentrate on making him stronger, making optimal use of his excellent hindquarters and work carefully towards Grand Prix sport. Although For Romance I OLD is in great demand as a breeding stallion, he is incredibly sweet and will do almost anything for a lump of sugar. He’s also extremely well-behaved, even when other horses are in the arena.” The 36-year-old Swedish trainer took bronze at the European Championship in Rotterdam this year with her other Oldenburg ambassador, Dante Weltino OLD. This black beauty is not just thrilling horse fans in sport. He’s also sired about 30 licensed and price-winning stallions, including the champion stallions Fashion in Black and Feuerwerk, the HLP champions Ferrero and Fidelio Royal and numerous premium stallions including For Final OLD, national vice-champion and third-place winner in the state championship, likewise stationed at Lodbergen. For Romance I OLD has also sired more than 80 premium mares and numerous championship winners. “His offspring inherit his lovely face, his outstanding typical beauty, his elegance, his rideability and his absolute determination to win”, reports Stud Lodbergen’s manager Wolfgang Stagge. “Romance consistently succeeds in producing not just horses for pro riders but for amateurs as well, as his offspring are easy to handle but always come through when it counts.”
For Romance I OLD is a full brother to premium stallion For Romance II, licensed in 2015 in Vechta, For Romance III, licensed in 2019 in Redefin, and champion elite mare and national champion Fasine OLD. He is also half-brother to 2015 Mecklenburg licensing champion Feinrich and to 2017 Oldenburg champion mare Fürstin Gesine by Fürst Heinrich. For Romance I OLD's dam line goes back to the renowned sire Voltaire.

VTV Jumping Stallion
Chap II, OS, born 2010, by Cellestial out of Cora by Contender - Ansas, owned and bred by Schmidt & Schmidt GbR, Neu-Benthen, was named 2012 reserve licensing champion of the Springpferdezuchtverband Oldenburg-International. This charming grey finished his 30-day test in Münster-Handorf by being named reserve champion, having received outstanding marks: a 10.0 for free jumping, an 8.25 for rideability and a 9.75 on the jumping course. Chap II, trained by Johannes Holzeder and Heiko Schmidt, triumphed in jumping horse tests from 1.00 m to 1.30 m classes in his age categories, starting as a four-year-old. At the Bundeschampionat 2015 in Warendorf under Johannes Holzeder he took the incredible mark of 9.2 in the final qualification for five-year-old jumping horses. Chap II, together with his rider Christoph Lanske since January 2018, currently places well internationally in jumping tests up to S*** level, including the CSI in Braunschweig. “Chappy has a naturally good jumping technique and an elegant body that he uses well on the course. He also has an excellent temperament. He executes a demanding 1.60 m course like a master despite his extreme youth. Furthermore he’s always well-behaved and even-tempered at work and in daily interaction, as well as great fun to ride off-road”, says Lanske.
And in breeding, this stallion is meanwhile turning heads by producing not only champion foals and mares as well as free jumping champions and top auction horses, but also two licensed stallions.
His dam, the elite mare Cora, was successful up to class M under her sport name China Blue. Paired with Exmiras she produced the 2003 Mecklenburg licensing champion Effenberg as well as his older full brother Chap I, who debuted in 2006 in Redefin and has had international 1.60 m class successes. Chap I was awarded the title Oldenburg VTV Stallion of the Year in 2014 and places in World Cup jumping under Abdullah Al Sharbatly. Cora is also dam to the state premium mare Chinchilla by Cellestial, who placed in advanced jumping classes after having delivered two prize-winning foals. Great-granddam Elfe together with Ile de Bourbon produced the stallion Bourbon, who is being used for breeding in Sweden. 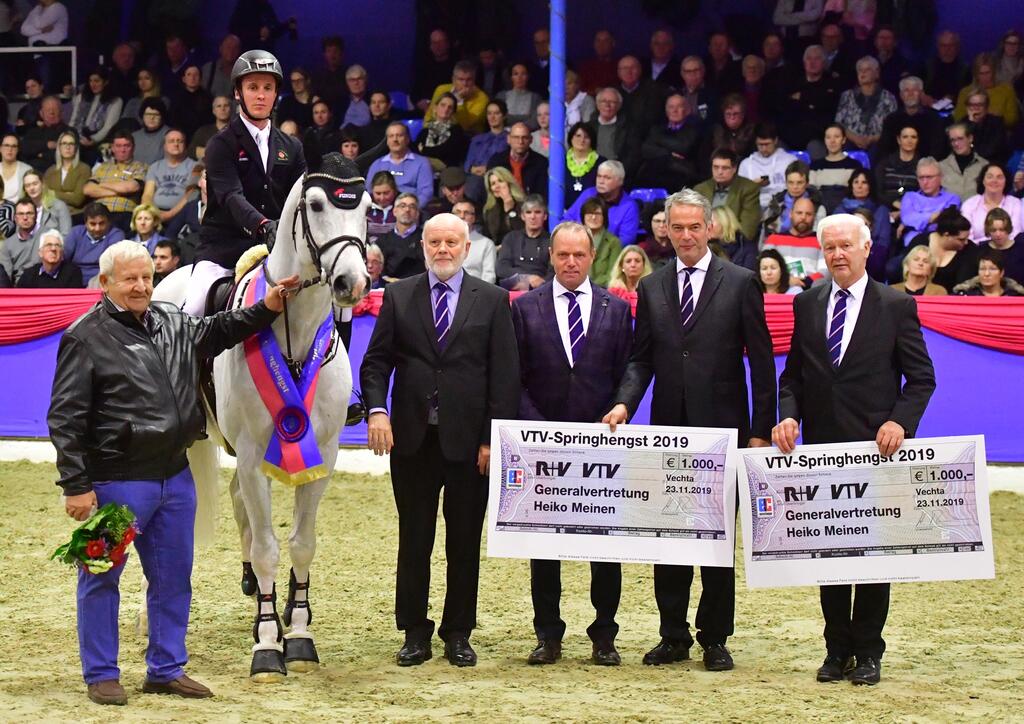