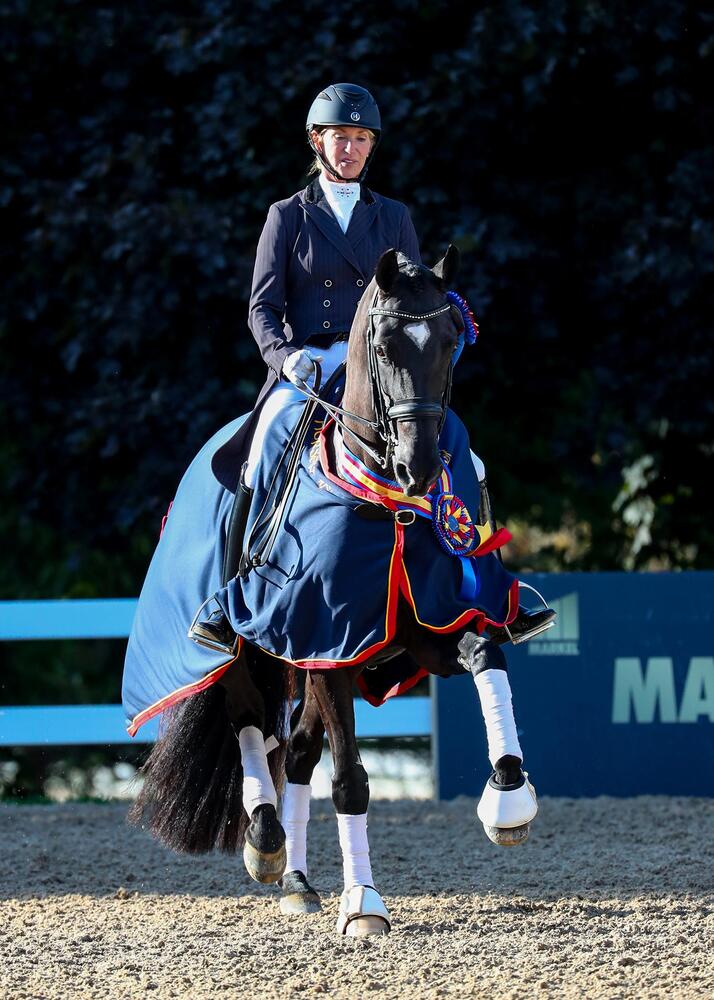 Damon’s Fantasy, born 2011, by Damon Hill out of Frascaya by Florencio I - Santander H - Freiherr, bred by Britta and Hans Scherbring Gbr, Visbek, Germany, and owned by Kathy Priest, USA, and her owner won the blue ribbon across all three tests to win the U.S. Developing Prix St. Georges Horse Championship. “[Winning the national championship] is very exciting. This mare is one I’ve had since she was four-years-old, so I was looking forward to doing this with her,” said Priest. “I was really happy that she had really good energy in [the ring], and that's what you have to have for the future, so I felt like even with a few little mistakes I could get her back and concentrated, and she wanted to go and work for it. I want a grand prix horse. I feel like she has that quality.” The mare was discovered at the Fall Elite Auction 2015 in Vechta.

Don Claudio, born 2003, by Don Larino out of Calmera by Santander H - Strohmann xx, bred by Gerd Folkers, Wangerland, Germany, and owned by Kaylee Christensen, USA, and his owner took sixth place in the US Junior Championship.

Fairouz, born 2013, by Franziskus out of Diva by Don Frederico - Wittinger, bred by Bramall/Dusche GbR, Isernhagen, Germany, and owned by Alice Tarjan, USA, and her owner earned the six-year-old reserve championship. “I'm really happy with how she did. She's been second every year, so she's very consistent," said Alice. "I didn't think she was quite ready … [but we wanted to] get some experience, so I'm thrilled with how we ended up.”

Fiderprinz, born 2009, by Fidertanz out of Pamina by Prinz Oldenburg - Volturno, bred by Gerd Claussen, Edewecht, Germany, and owned by Jori Dupell, USA, and Jori Dupell held on to her lead following the Junior Individual Test to win the US Junior Championship. “[Winning the title] means a lot. It's really rewarding to work so hard all season and continue to progress. [Competing at the U.S. Dressage Festival of Champions] and having a personal best was just really amazing,” said Dupell, who won individual silver in the Junior Freestyle at the Adequan® FEI North American Youth Championships presented by Gotham North earlier in the month. “For me [this] was the best he's ever gone in [the Individual] test … He was just really with me the entire time. I can't really fault him for anything.”

Floretienne, born 2009, by Florestan I out of Tamarinde by Jazz - Matador II - Rubinstein I - Welt As, bred by Judy G. Yancey, USA, and owned by Leslie Watermann, USA, and Emily Miles took fourth place in the the U.S. Developing Grand Prix Horse Championship. Floretienne is the sister of Quantum Jazz.

WEC's Senor Rubinstein, born 2013, by Sir Donnerhall I out of Walinka by Rubinstein I - Werther - Graphit, bred by Franz-Josef Wieghaus-Vorwerk, Neuenkirchen, Germany, and owned by Marta Renilla, USA, and his owner placed sixth in the U.S. Six-Year-Old Dressage Championship.

Summersby II, born 2015, by Sezuan out of Summer Night by Sandro Hit - Donnerhall, bred by Nicole Wanning, Schüttorf, Germany, and owned by Alice Tarjan, USA, and her owner earned reserve title in the U.S. Four-Year-Old Dressage Championship. “I bought this horse as a foal," said Tarjan. "She is a very beautiful horse. She’s fun; she’s giant. It’s been fun bringing her along, and it’s been relatively easy. She can be a little hot and spooky sometimes, but she’s really not that bad. She has been super behaved all week so I’m really pleased with that.”