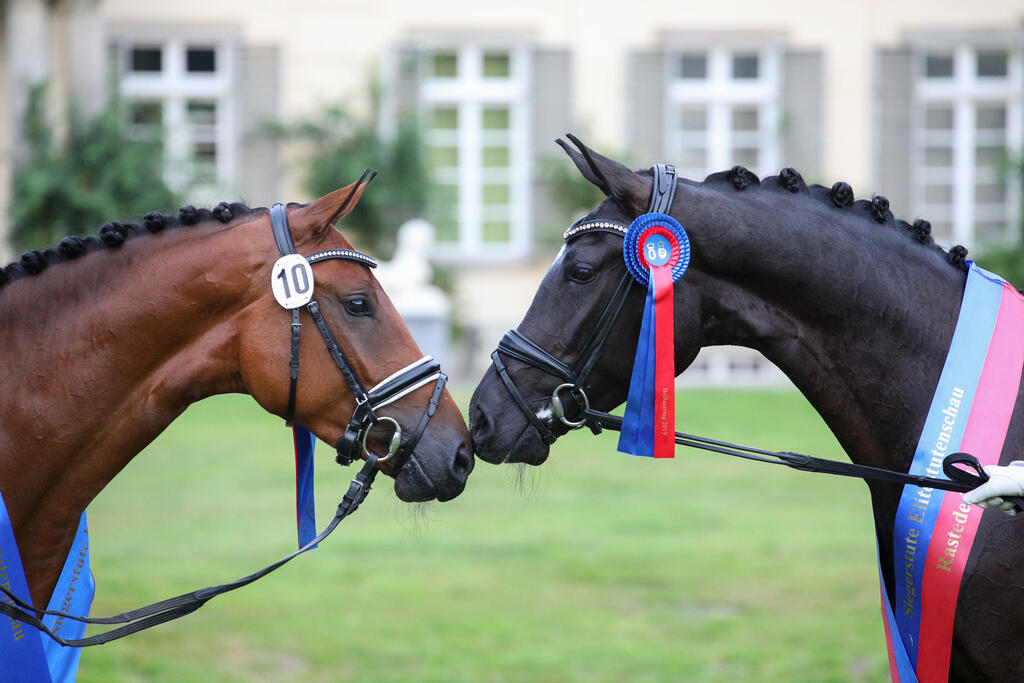 The Oldenburg Elite Broodmare Show took place in front of the impressive scenery of the Rasteder Schlosspark for the 14th time. Numerous mares from Rastede have already made the leap into international top sport. And once again Oldenburg's best mares showed off with best quality.

The celebrated Champion Mare of the Verband der Züchter des Oldenburger Pferdes (OL) is Heideromanze, born 2015, by For Romance I out of Heiderose by San Amour I - De Niro - Donnerhall, bred and owned by Vera Jürgens, Arnsberg. "Last year we were the first time in Rastede for the Elite Broodmare Show. Our goal was to get a mare nominated for Rastede someday. That our Heideromanze directly become Champion Mare this year, we didn’t expect. A dream came true. Heideromanze has shown her best side. We are very proud of her”, said the breeder pair Vera and Michael Jürgens from Arnsberg in North Rhine-Westphalia very happy. Her dam Heiderose also placed at the Brillantring in Rastede 2012.

The title of the Champion Mare at the Springpferdezuchtverband Oldenburg-International (OS) went to Con Sugar, OS, born 2016, by Solitaire out of Con Leche by Check In - Contendro I - For Pleasure, bred and owned by Franz-Rudolf Sanktjohanser from Löningen. “I'm overjoyed that my Con Sugar has become Champion Mare. She has done a very good performance test and jumps with much overview. I am particularly proud that three generations of her dams became Champion Mares in Rastede. This does not happened to a breeder every day. Con Sugar is the darling of our family. I am looking forward to seeing her in the sport next year”, says breeder Franz-Rudolf Sanktjohanser from Löningen. Already her dam Con Leche and granddam Con Pleasure were celebrated Champion Mares in Rastede.

Reserve Champion in the jumper class is Jolina, born 2015, by Casiro I out of Jornesse by Junior Mariner - Cordeur - Zeus, bred and owned by Ludger Holthaus from Bösel. On her dam side, the Reserve Champion goes back to the well-known Jonande-dam line which also brought the international successful Aquarell PW by Argentinus under Joachim Heyer as well as the OS Champion Mares Jella by Last Man Standing and Juwina by Diarado. The Ic premium went to Lütte Deern, born 2016, by Lordanos out of La Fee by Cariletto - Lordon - Malteser, bred and owned by Petra Keil from Lautertal.

Here you can find all results from the Brillantring:

Foto: The champion mares of the Oldenburg Elite Broodmare Show 2019: Con Sugar by Solitair (left) and Heideromanze by For Romance I (right). (LL-Foto)